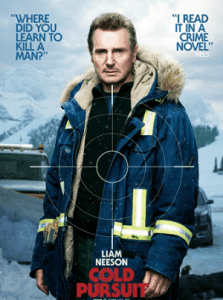 Liam Neeson has always been able to provide audiences with fairly strong performances, regardless of what style of movie he’s making. His action movie outputs are something I’m not well versed in, but nonetheless was a sub-genre I had convinced myself was worth checking out. But after the limited output provided by Cold Pursuit, I’m not entirely sure what to think anymore.

As far as action movies go, Cold Pursuit may be the most confusing one of all. I’m still not entirely convinced the film knows which genre exactly it wants to slot into. There’s not enough action for it to be an action movie, nor is there enough drama or comedy for it to tick the categories of the other two genres. Such a strange mix of all three, and it doesn’t work that well either. The movie consistently changes its tone and it makes for an extremely difficult watch.

At least the performance of Liam Neeson is somewhat enjoyable. His character development is next to none, and the inconsistency that comes from his motif and general progression throughout the movie stops Cold Pursuit being anything more than visually enjoyable and vaguely connective.

For the supporting cast, nothing can really be said. Laura Dern just disappears about half an hour into the movie without any real explanation. Tom Bateman’s turn as the villainous Viking is horrendous. He’s quite an awful actor all things considered, and his performance here is nauseatingly poor.

More or less a one-man show, Cold Pursuit shows the strengths of Liam Neeson are not fading with age. He’s still a strong lead, albeit a bland one here. For the most part, it’s a cheap version of Taken but the twist is Liam Neeson has armed himself with a snow plow. Feeling more like what would happen when a B-Movie style plot is elevated to blockbuster standard, Cold Pursuit is an instantly forgettable piece of film.