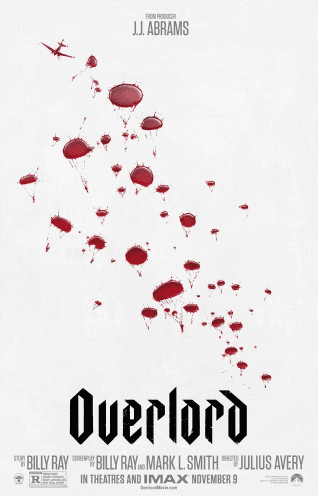 A couple of months back, us cinema fans were eagerly anticipating the fourth instalment into the Cloverfield franchise. A solid beginning with the original was soon overtaken by an excellent sequel with 10 Cloverfield Lane and an abysmal third to round off the trilogy with Cloverfield: Paradox. Maybe it was the failure of that third title that landed Overlord its very own standalone release, as for some time it was rumoured to be the next instalment in the aforementioned monster horror series.

Thankfully, it’s not, and because of this Overlord is able to attempt its own voice of cinema, to varying levels of success. Jovan Adepo’s leading performance as Pvt. Ed Boyce may be the one that launches a moderately solid action career. His performance throughout isn’t anything that special, at times his line delivery is truly abysmal. But for the most part, he’s a solid and, more importantly, likeable lead. Spending such a large amount of time with a certain group of characters, it’s important that they’re a likeable bunch. This is the case, to some extent.

Overlord’s biggest problem is that although these characters are fairly consistent, they lack depth entirely. Falling into the dreaded stereotypes of the war genre, we have the hot-headed leader, the inept rookie and the walking, talking, Brooklyn stereotype to round off the squad. Alongside them is the token female badass, a French child that will connect with the character you’d think least likely and of course, a villain that can speak both German and English.

All of these clichés rub off on one another to extremely varying degrees of success. Luckily, they provide some great action sequences, which although are few and far between do provide some enjoyable content. What’s rather baffling though is that the films biggest twist is also its most underutilised. Taking several leaves from the book of John Carpenter, the visual effects are truly stunning, bloody and gory. The only issue there is that, for an action/horror blend, there’s simply not enough action or horror.

One or two jumpscares pave the way of an otherwise so-so plot and there’s not a single genuine scare in sight. At least the worldbuilding and build-up of tension is fairly strong, but it’s not long before director Julius Avery cranks it up to 11 with the twist factors. Even when the film is taking its twists to the foreground, they still feel underutilised and even a bit underwhelming at times. For a film that prides itself on visual prowess, there’s not really all that much to look at.

For all its glossy visuals and impressive cinematography, Overlord lacks a competent story and a depth to any of its small band of characters and subtexts. What could’ve been the next big genre buster instead becomes one that conforms to expected clichés of the genre, most probably because of a lacking script. Still, with one or two stand-out action sequences and some generally enjoyable content throughout, Overlord is by far the most interesting thing J.J. Abrams has been involved in for the past decade.