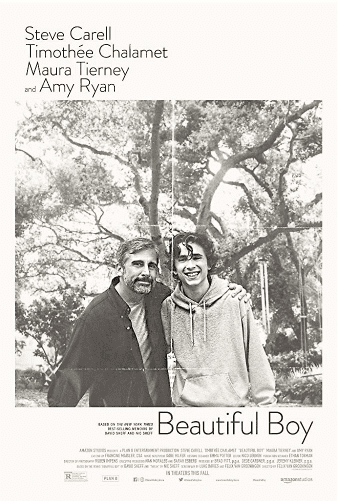 Oscar snubs are one thing, but the sheer audacity of the Academy is obvious when you realise Timothée Chalamet and Steve Carell went without Oscar nominations this year. While Beautiful Boy may not be the best remembered film of the year, it’s certainly a strong enough movie to warrant a bit more praise from critics and fans alike.

By far the highlighting point of the movie is the tense relationship between Chalamet and Carell’s Nic and David Sheff. A father and son brought together by family ties, yet distanced by Nic’s frequency to relapse into the world of addiction. For most of the movie, we see Nic struggle with the highs and lows of this addiction, and David’s inability to help and the frustrations that follow.

In turn, we receive some of Carell and Chalamet’s finest work. Carell, in particular, is incredible the whole way through, blending anger and grief into one perfect performance. As for Chalamet, much the same happens, with a strong performance that manages to somewhat capture the highs and lows of drug abuse and general addiction.

From there though, Beautiful Boy has little else to offer other than a few strong performances by the two leads. The supporting cast isn’t all that interesting, however, it is nice to see Amy Ryan getting roles post-The Office. But as far as her actual performance is concerned, it’s not the most interesting; this is a trend that carries over into the rest of the performances throughout the movie. Nobody else really stands out or offers anything unique or interesting to the movie.

What’s even worse is that this problem carries over into the general direction of the movie. A first-time experience with the work of Felix van Groeningen doesn’t offer me much and I doubt I’ll be returning for a second run of his work anytime soon. It’s not bad, it’s just not interesting and I suppose that’s the sacrifice he makes to keep us on track with the story.

Not the worst biopic ever offered up, that award goes to 24 Hour Party People. But Beautiful Boy has some great leading performances that rely strongly on one another throughout. Hell, the entire movie relies on these performances so strongly that it’s often hard to enjoy any other aspect. With some fine direction throughout, Beautiful Boy is a biopic basing all of its merits on two strong performances from two of Hollywood’s finest actors.