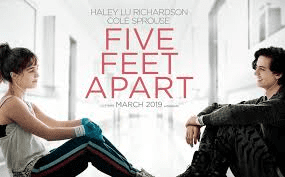 Cole Sprouse still can’t act. I doubt this comes as a surprise to any of you, but I felt it was worth stating outright.

Five Feet Apart is an example of what happens when nobody on the production cares about the film and is only in it for money rather than creative integrity or entertainment value. I’ve never quite understood what it is with Hollywood and the infantile romanticisation of disease in films such as The Fault In Our Stars and indeed, this. Except, at least it was done mildly well with Fault In Our Stars and BOTH the leads were likeable and could act. This just comes off as an attempt to cash in on the popularity The Fault In Our Stars had four years too late.

Five Feet Apart is about two teenagers with Cystic Fibrosis who fall in love with each other while in the same way, but they’re not allowed within six feet of each other in case they contract each other’s bacteria and become even more disease riddled than they already are. It’s a simple plot, but one that could have worked if it had a competent director and a half decent cast. It’s a shame then, that it only has one half-decent actor in Haley-Lu Richardson.

Speaking of Haley-Lu Richardson, she plays Stella, a teenager who is waiting for a lung transplant thanks to her extreme cystic fibrosis. She’s far and away the best part of this entire mess. She’s actually got the charisma that her character demands and can actually, y’know, act. Her co-star, Cole Sprouse, gives one of the dullest, most uninspired performances I’ve ever seen in a film, however. Do you reckon Sprouse can turn off his emo or is that literally the only emotion he has? Moises Arias also stars as Poe, Stella’s best friend, and I guess he’s alright? He’s just there, and at points, he’s annoying in the extreme, but he’s still the second best character in the film (not that that is really a ringing endorsement.)

The biggest issue with the film, aside from Sprouse’s performance, if you could even call it that, is that it’s needlessly cliched and overwrought. It’s a film designed to emotionally manipulate you, but it’s not even trying to be subtle about this, unlike other attempts. The direction is also extremely generic and bland and honestly? I’d rather a film had bad direction over meh direction. Then again, I don’t quite know what else I was expecting from Justin Baldoni, the same man who directed such shows as Jane The Virgin.

Five Feet Apart is a mediocre attempt at a film that isn’t worth anybody’s money. Don’t bother spending anything on this film, it’s just not worth it.

I’m still angry at myself for spending six pounds on it.