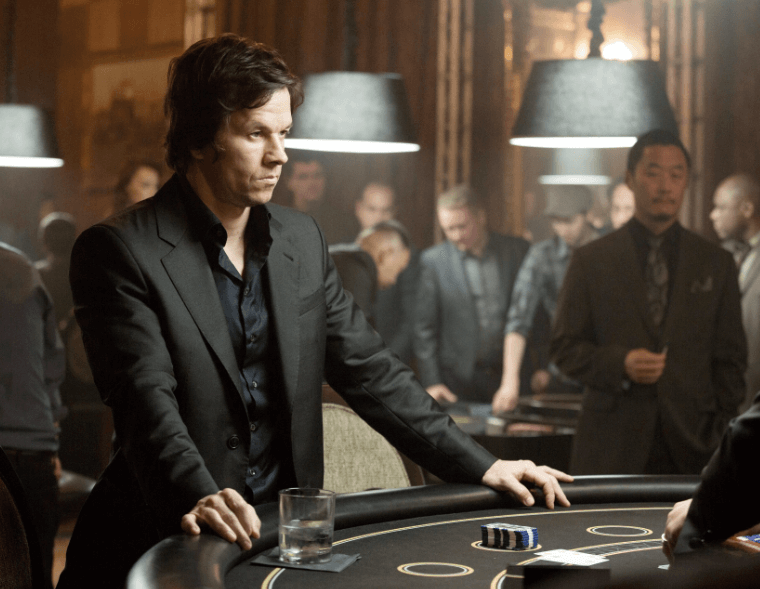 Maybe, just maybe, I should stop basing my viewings on who appears on the soundtrack. The only reason I had any intention whatsoever of watching Rupert Wyatt’s bland and obnoxious The Gambler was so I could hear my favourite band, Pulp, for all of forty seconds. But if my favourite band can’t save a movie, then neither can a couple of actors I surreptitiously tend to appreciate. Not with a script as bad as this one anyway.

Mark Wahlberg has one or two good movies behind him, the rest are absolute garbage. He’s definitely came under a lot of flak as of late, putting redundantly poor action movies behind him so he can pursue a career in the drama field. Unfortunately, dramatic movies are often easy to misfire, and that’s exactly what happens in The Gambler. Instead of the nervous, down-on-his luck and guilt-ridden English professor, we instead get a cocky, sophisticated ladies’ man, a role that Wahlberg plays about as well as a seal plays a trombone.

It’s not his efforts that bother me, there are one or two scenes that are slightly convincing of a decent performance. This is unfortunately unravelled when Wahlberg is given anything of moderate difficulty or relevance to do. For all its borderline compelling scenes within casino floors and bail bondsmen meetings, there’s no real depth to anyone featured throughout the movie. Swfitly deteriorating into a subliminal rom-drama-com, Wahlberg becomes infatuated with Larson’s Amy Phillips, who’s only compelling trait is a solid taste in 1996 Britpop party anthems.

Larson is a great actor, she proved that with her Oscar win in Room and moreso in Free Fire. Not so much in Captain Marvel or The Gambler, but like I said, every actor makes a misstep from time to time, especially with drama movies. It’s just a shame then that this remake of the James Caan classic fails to not only recapture the glorious moments that were spread out in the original, but also because as a modern and unique piece of film it fails to say anything.

There’s no worse trait than not having anything to say, and that’s The Gambler’s biggest problem of all. It cruises through its dull plot as if it didn’t have a care in the world for anyone or anything involved in the production of this movie. Still, John Goodman was bald and had a goatee, I suppose some things are worth seeing at least once before we leave this mortal hellhole. At least after death I won’t have to watch The Gambler.