The deal welcomes City Hall to the portfolio of award-winning venues across the UK that are owned and operated by Academy Music Group, including London’s iconic O2 Academy Brixton and O2 Shepherd’s Bush Empire. As part of the agreement, City Hall, will be rebranded O2 City Hall Newcastle from 03 May 2019 as part of Academy Music Group and Live Nation Entertainment’s long-standing partnership with O2, which began in January 2009. This announcement follows AMG’s recent addition to Group, the 3,500-capacity O2 Victoria Warehouse Manchester, in August 2018.

Opened in 1927, the Grade-II-listed City Hall is a major part of the city’s cultural heritage as one of Newcastle’s first dedicated concert venues, which also houses an original Harrison and Harrison Organ. For 40 years the City Hall hosted major orchestral concerts, until the explosion that was the 1960s when it opened its doors to pop music greats. Since then it has maintained its position as one of the country’s leading live entertainment venues. 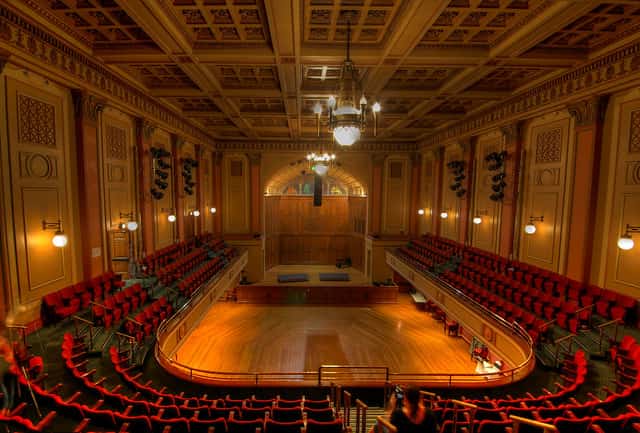 The Theatre Royal Trust took over the management of City Hall from Newcastle City Council in April 2016 and has made significant improvements to the building over the last three years.

“Newcastle has a musical heritage to be proud of. It’s a city that is famed for its nightlife, and live music especially plays a major part in that” says Graham Walters, Chief Operating Officer, Academy Music Group. “Here at AMG, we are renowned for our experience in live entertainment and venues across the UK, particularly historic and listed buildings; and we’re delighted to be shaping one of Newcastle’s most iconic venues with the ambition to entertain and preserve its amazing history. We look forward to presenting a full range of live music and events and securing its future for many years to come.”

“Academy Music Group is an industry leader in concert hall management and promotion” adds Philip Bernays, Chief Executive, Newcastle Theatre Royal Trust. “They have the industry expertise and resources to develop both programming as well as the building to ensure O2 City Hall Newcastle continues to thrive as one of the major venues for Newcastle and the North East.”

Peter Kay, Chief Executive of Fusion Lifestyle, says; “We’re delighted to be working in partnership with Academy Music Group, the UK’s leading live entertainment operator. With its industry experience and unrivalled access to leading artists and entertainers, this move will continue the reinvigoration of City Hall – adding yet another reason why Newcastle is such an exciting and important visitor destination; City Baths and City Hall are both much-loved buildings filled with memories for the people of the region.”

Gareth Griffiths, Head of Sponsorship, O2, concludes: “O2 City Hall Newcastle is a fantastic addition to our O2 Academy estate and further demonstrates O2 and Academy Music Group’s commitment to live music in Newcastle. With Priority Tickets, O2 customers will have access to tickets 48 hours before general release. Furthermore, all Priority Tickets for this venue will be mobile only, helping to combat ticket fraud and ensuring tickets go to genuine fans so they can experience more live music and events in this historic building.”