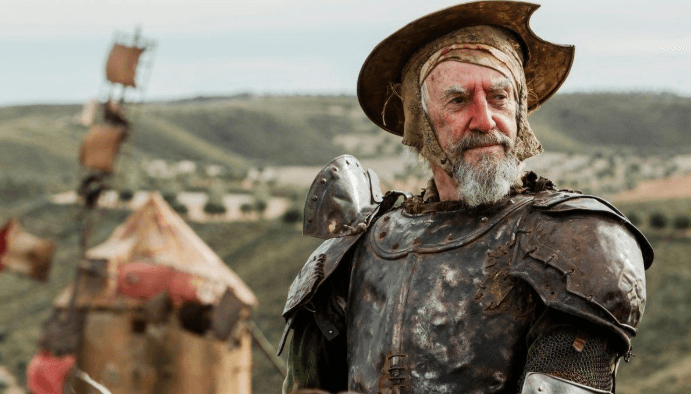 For a project that has taken almost two decades to come into fruition, The Man Who Killed Don Quixote certainly isn’t anything of merit. Gilliam’s latest work shows off what happens when he restrains his stylistic impulses and replaces them with genuine storytelling skills: as it turns out, he’s got an unexpectedly restricted narrative mind.

That’s probably why his films often feel so strangely bloated and oddly directed: it’s all because he’s not really that good when it comes to the finer details or conventions of a narrative. His work in The Man Who Killed Don Quixote though is the closest Gilliam has ever gotten to managing a good piece of character work, relying more on the performances of Adam Driver and Jonathan Pryce than his own direction.

It’s a pleasant surprise to see that Pryce is still cropping up in large roles, especially after the last thing I remember him being in is the 1997 Bond flick, Tomorrow Never Dies. His role as the titular Don Quixote is some of his best work, a maddened shoemaker who’s convinced he is, in fact, the fabled legend, cursed to walk the Earth in search of Sancho. Sancho, as it turns out, is a hot-headed, stereotypical tool in the form of snooty director Tom, played by Adam Driver.

Driver and Pryce are superb together, really pulling a narrative experience worth following, right up until the final act of the movie. It all begins to fall apart at that point, with puzzling pacing and some useless scenes throughout. The bridge from reality to fantasy that the film had slowly begun building is hurried to the finish, in turn leaving not so much a second to contemplate such a varied and large change.

Still, their leading roles are just enough to push past the middling performances of Stellan Skarsgard and everyone else. The two have such an amazing chemistry that holds up the film, and with a few solid bits of direction from Gilliam.

The Man Who Killed Don Quixote is his most interesting project to date. It’s just a shame that his success comes from the subversion of his own style.