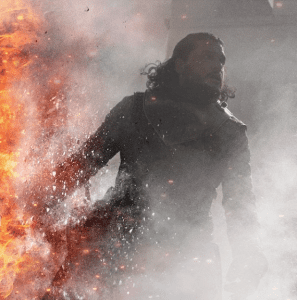 The penultimate episode of the final ever season of Game of Thrones leaves much to be desired.

Following off after the death of Missandei (Nathalie Emmanuel) at King’s Landing in the previous episode, Daenerys Targaryen (Emilia Clarke) seems to be going through some sort of shock. It doesn’t help that Varys (Conleth Hill) is talking about putting Jon on the Iron Throne instead of her, which is treason.

Varys soon met his end in the episode, with Tyrion (Peter Dinklage) snitching on him to Daenerys. This resulted in his execution, burnt alive by the hands of the the Targaryen queen’s last surviving dragon, Drogon.

This is one point that doesn’t make sense within the episode: Tyrion told on Varys for being treasonous and then goes to do the exact same thing.

This is all because his older brother, Jamie Lannister (Nikolaj Coster-Waladu), is captured sneaking into the Targaryen camp. However, it does come with a heart felt moment when the little lion announces that he wouldn’t have survived his childhood if it wasn’t for Jamie.

To be fair, I was very curious after the fourth episode as to how Dany would be able to successfully storm King’s Landing without getting herself or Drogon killed in the process. That thought was answered in this episode, as Daenerys swooped in from above the clouds and destroyed the Iron Fleet (commanded by Euron Greyjoy, played by Pilou Asbæk), followed by the total destruction of all of the massive, dragon-killing crossbows mounted on the walls of the capital of Westeros.

Although it was annoying to see, when the bells started to ring out in surrender, it should have stopped the attack on the capital. But not for Daenerys! Oh no, she wanted to kill Cersei (Lena Headey) and pretty much half of King’s Landing – and I mean both the citizens and the structures of King’s Landing: they’re going to need to find a new capital after this episode.

In this episode, Daenerys became her father in a way as she burnt them all.  In fact, she went beyond him,  doing something that the ‘mad king’ couldn’t achieve himself during the earlier rebellion that claimed the Iron Throne.

At least one fan has found some light in this season, where others cannot.

The memes have been the best part of this season hands down #GameofThrones pic.twitter.com/9vpdGgrPyw

And so, what looked to be an easy victory with minimal blood spilt, turned into an absolute massacre.  This was shown again when the Unsullied warriors killed the already surrendered Lannister army before they were able to bear arms again to defend themselves.

I wonder if, in the next episode, there will be repercussions for Jon Snow (Kit Harington) after he killed one of his own Bannermen.  This was on the grounds that the Bannerman was going to rape a fleeing citizen of King’s Landing. This at least shows that Snow still abides by a moral code.

Elsewhere, the showdown between The Hound (Rory McCann) and his undead brother, The Mountain (Hafþór Júlíus Björnsson) was a long time coming for fans of the show. It was getting annoying though that, no matter what he did, the undead beast was still standing! Well, until The Hound threw himself and his undead brother off the side of the crumbling Red Keep.

Talk about the higher you, are the harder you fall.

With the massacre at the capital, I do wonder if this will shift Jon’s ideas on the fate of the Iron Throne. Will he try and take it from Daenerys?  He has a stronger claim to it and she is clearly emotionally unstable.

In all fairness, this episode could of been handled better. All the character developments made over the last eight seasons have all ultimately come to nothing: Daenerys has pretty much became her father, someone who was the opposite of her personality and mentality throughout the seasons; meanwhile, Jamie Lannister left Cersei in season 7 during his redemption arc, only to go back to her here. At least their relationship did eventually come to a crushing end. It’s not good for the unborn baby though.

On the other hand, some fans aren’t fooled by their death.

I wont be shocked if this happens!! #GameofThrones pic.twitter.com/kkvdcAeN8U

What’s going to happen next week, in the last episode of the entire franchise, is anyone’s guess. Nevertheless, Here’s the trailer: