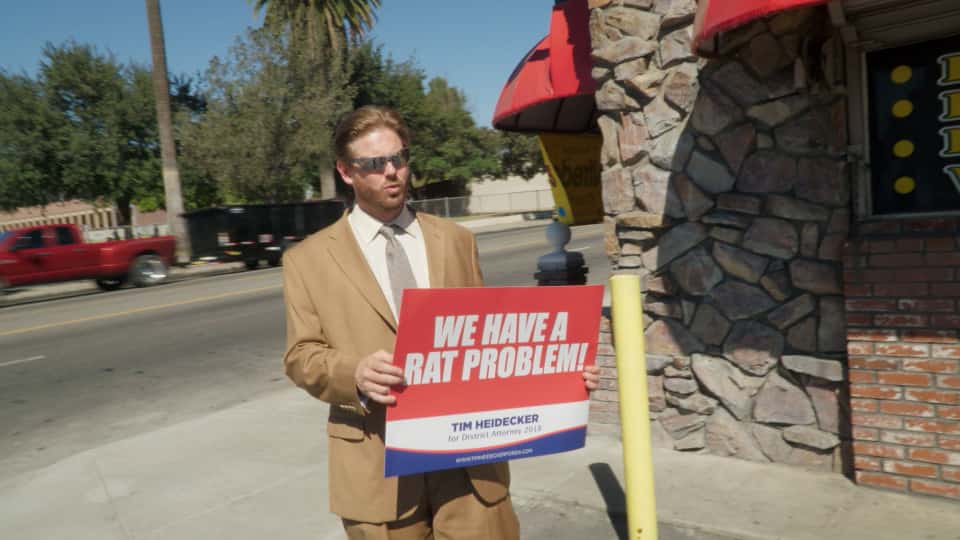 The cult status of comedian Tim Heidecker has snowballed from a small-scale show on Adult Swim into a full-fledged movie, where a caricature of Heidecker runs for district attorney. In preparation for this, I dabbled in some episodes of his web series On Cinema at the Cinema and sat through the very funny, albeit lengthy The Trial, a five-hour comedy piece made to look like a genuine trial. For those unaware or uninterested in Tim Heidecker as a persona, Mister America is certainly not for you, it relies on a great deal of backstory and understanding; but at the same time doesn’t ever bring this to the forefront of Mister America, the latest instalment into this lengthy experience.

At times, Heidecker hits the nail on the head with what he attempts to do, blending cult comedy status with his propensity to commentate on the self-inflicted wound that is American politics. Most of the time though, he gets wrapped up in his own shtick, throwing in components of his web series instead of focusing on what could’ve been a much more inclusive film. Rightly so though, for him to focus in on what made his webseries popular. It is a film that is, after all, for fans of such a show, but for those looking to dive in head first with no prior knowledge, I wouldn’t recommend doing so.

Even at its core, as just a comedy film, it isn’t the funniest piece made. We rely greatly on the awkwardness of a mockumentary style setup, following Heidecker on his campaign trail. Only a handful of jokes really land or have enough of a ripple effect to carry on throughout the rest of the film. Any real build up comes from the erratic camera movements, behind the scenes footage or just whenever Heidecker is doing his usual, off the chain affair. None of it really comes together all that well though, and we’re left with snippets of funnier material and a whole lot of filler.

Director Eric Notarnicola should be happy his complacency in directing Heidecker is what sells him as the only man that could give us a picture to this extent. He manages to adapt to new styles of shooting very well, with his leap from courtroom-based drama The Trial to documentary style choices in Mister America solidifying his ability to jump from genre to genre. Then again though, his style of direction here isn’t the most interesting or even the most relevant, the show is and always will be Heidecker. It’s down to him alone to give us something worthwhile, and he only just manages it.

Mister America attempts to re-invent the comedic structure we’ve come to know and loathe. It does so with limited effect, a real misfire that feels like it needs a lot more to work with than it’s been given. At times, we’re given something to look forward to, but Heidecker and crew are never quite able to push it over the line to where the comedy resides. A tad humourless, but still a decent enough watch for fans of the show, Mister America falls short of its expected hilarity.