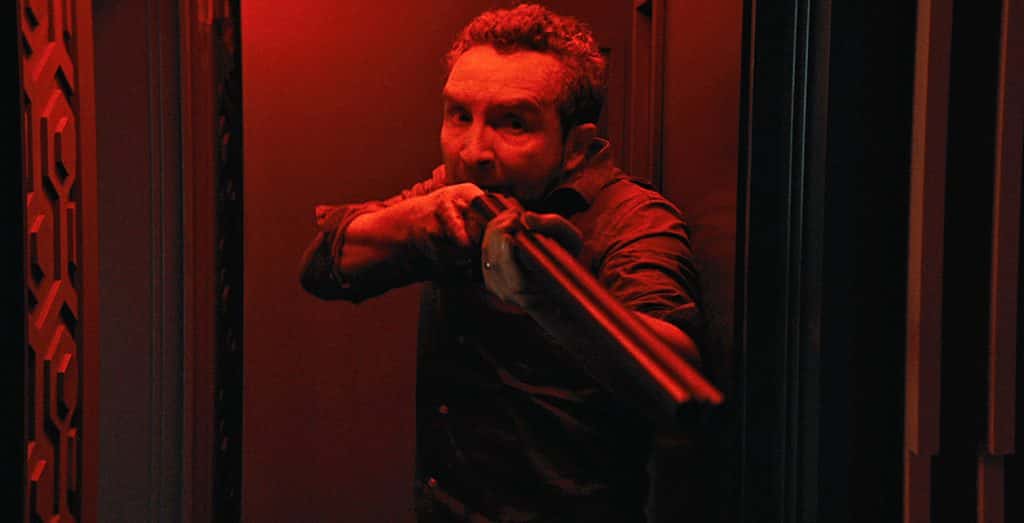 Eddie Marsan may be one of the most dependable actors working today. It’s nice to see him finally get a handful of leading roles, because the supporting work he gives us isn’t quite enough to fill my need for something much larger from him. Bits and pieces from the likes of The World’s End and The Professor and the Madman have given us a taste of what he’s capable of, but Feedback provides us evidence of his leading role potential. The directorial debut of Pedro C. Alonso, Feedback is a thriller that lacks thrills, but provides us with a few solid pieces of collaborative filmmaking.

Marsan’s performance as radio jockey Jarvis is the clear highlight of the film, with a strong performance that could’ve been stronger with a better script. He plays the uptight, every man for himself style character very well, and it’s a defining piece of his performance here. One of the few positives to the film is how well Marsan’s performance works with the director’s cinematography and lighting, a real bravado surrounds the dark lighting and terrifyingly cramped compartments that litter the radio station.

There are uncomfortable pieces of violence, making the film feel less like a thriller and more like snippets of torture interluded by long, drawn out pieces of dialogue that don’t seem to go anywhere. If its aim was to make its audience uncomfortable, then Feedback would certainly succeed on that level. By this point though all is lost, the film relies on brief psychedelic nightmares rather than the lost inspiration of a slow burning story. From this point on the story is of no use, lost to some terribly stupid twists in the plot that would’ve made more sense if the characters had been built up properly.

But that’s the problem with films that have one star and a whole slew of unknown faces. A good diving board for those within, but more often than not their performances are forgettable messes, that, because of a bad script, will tank the entire movie. The same happens here, with the likes of Paul Anderson, Ivana Baquero and newcomer Alana Boden struggling to keep their heads above water among a script that feels like it’s on its first draft.

Some of the performances in these supporting roles range from mediocre to awful. Line delivery is on a sporadic level of good and bad, with the highest points of the movie offering up the lowest in delivery. Brilliant scenes have their charm or thrilling heights broken by an awkward jilt or pause in the performance. The strong cinematography and intense lighting built up by Alonso’s soldiering debut of a film is brought to the ground by a script that is intense in its lack of quality.

The supporting performances really put this film at a bit of a loss, but Marsan’s leading role and the promising beginning to the career of director Alonso make Feedback a somewhat interesting, albeit poorly timed thriller. A film that makes it hard to root for any of the characters within is always going to be a difficult watch, and Feedback is just that, difficult to watch.