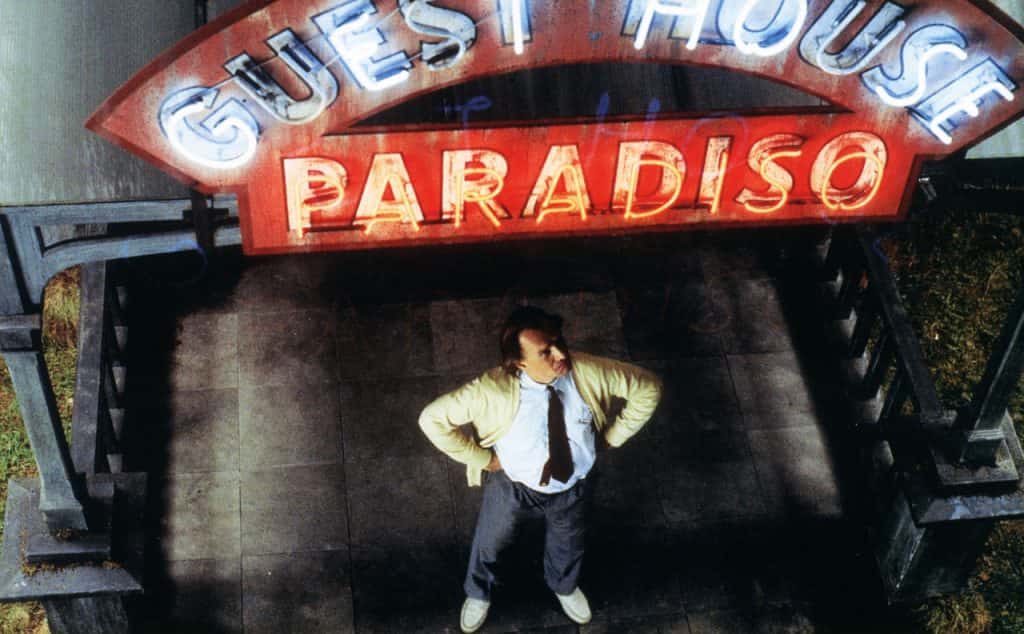 It’s hard to put into words why I love this film so much. Really it comes down to blatant nostalgia and a crippling love for the work of Rik Mayall and Adrian Edmondson, the stars of Guest House Paradiso. Extending the television show, Bottom, to a feature length movie was a certainly plausible idea. Their stage shows were working well, so the leap to the big screen only made sense. What followed is a movie I consider to be a cult piece of cinema. Even hardened fans of Mayall and Edmondson are quick to turn their nose up at or even forget that Guest House Paradiso exists.

I’m happy to burst the bubble for those that didn’t know of its existence, because it is well and truly one of the finest comedy films ever made. By no means is it smart in its writing, it’s your standard slapstick affair that follows Richard Twat and Eddie Hitler’s daily antics as they run the worst hotel in Britain. Painful slapstick and the occasional one liner litter the sporadically random, free flowing style of the film.

Director Ade Edmondson makes sure to get a good blend of solid cinematography that focuses on the gags and also scenes that represent and build off of the television show. Mayall and Edmondson have been playing the same two characters for years and it wouldn’t have made much sense to change it up for the big screen debut. Instead they bank off of what made them so successful on the television, slapstick to life threatening proportions. I was expecting there to be more of it, but what is in store is as creative as the two have gotten with their writing, with some hilarious pieces coming to fruition throughout.

But Guest House Paradiso doesn’t just focus on the wacky outings of its leading lads, it also manages to build up the supporting cast just enough to have them be likeable enough to care for, but annoying enough to see the humour in Richard and Eddie’s antics. Simon Pegg’s first supporting role in film sees him play Mr. Nice, a holidaymaker presumably on a romantic getaway with his wife and two children. Within minutes, Mrs. Nice has been poked in the eye, Mr. Nice has been robbed and the beloved kids are intoxicated.

With an alienating style, a sickening final act, cheap gags and Looney Tunes style action, it’s hard to express why I love this film so dearly. Maybe it’s the can-can of recognisable British actors, or the adulation and respect I have for Edmondson’s direction and Mayall’s writing. Either way, it’s a film that you’ll either revile or respect, loathe or love. Whichever way it goes, at least you’ll have seen one of the most bizarre films to ever see the light of day.