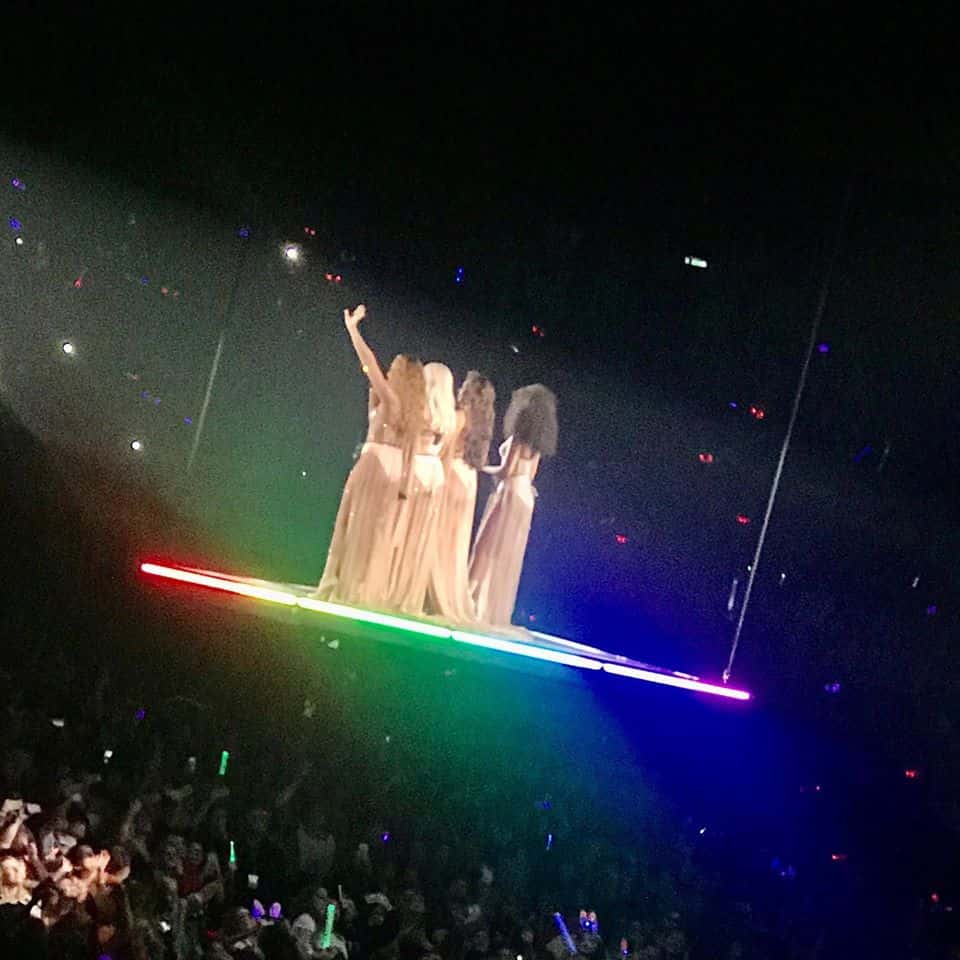 The show kicked off with the first of the two support acts; New Rules, a 3-piece band of baby-faced lads and their guitars.
All in all, they were enjoyable to watch as even sang a few of their original songs which were quite catchy. I got 5 Seconds of Summer / The Vamps vibes from them and knew they would be a massive hit with the teen girls in the audience.

Next, it was Mae Muller’s turn on the stage. She had a London bad-girl edge and delivered a good mixture of singing and rapping, while also working the stage with moves to rival Shakira herself. The artist’s original tracks, and her own arrangement of One Kiss by Dua Lipa and Calvin Harris, were incredible.
I instantly downloaded all her songs for further listening and became a new fan.

It was then time for the part we had all been waiting for…
The arena went dark and the screens were filled with dramatic footage of journalist Dan Walker announcing that Little Mix were taking the over the world, followed by flashes of female empowerment through the years, even taking us back to women getting the right to vote. My arms instantly prickled with goose bumps and, at that moment, we heard the voices of the girls singing The National Manthem – the 30-second intro track of the LM5 album.
The group then appeared in beautiful black and red outfits and provided us with the classics we all know and love such as Salute and Power, featuring breath-taking and powerful choreography to go with their harmonies and high notes.

As the show progressed, we saw Little Mix perform a variety of songs as they set about mixing it up with the old and the new. They also manage to change into many different outfits throughout, with each new look more beautiful than the last. One of the standout performances for me must be Wasabi – a clapback song, referencing their feud with Piers Morgan. It started with an opinion VT, showing supporters from all over the world and ending with negative comments from Piers Morgan, which the girls then answered in the form of a song.

Later, the girls emerged in exquisite glittering dresses and descended onto a moving stage that travelled across the arena.
It was a magical moment, as they sang their heart-wrenching, delicate songs. Starting with their female friendship themed track Told You So, they then progressed into their track The Cure which addresses overcoming depression, before ending with Secret Love Song, Part 2.
This final song is dedicated to the LGBT+ community and, as they sang it, the moving stage shone with the colours of the rainbow while multi coloured confetti burst out and rained down. This was my favourite part of the show and, as I looked around me and saw many fans with tears in their eyes, hugging their loved ones, I realised how important it was to everyone.

With more dazzling outfit changes, more angelic vocals, more captivating choreography and of course gorgeous visual effects (such as patterned rain coming down onto the stage), the show eventually came to an end with a big sparkling firework. The whole show was amazing, surpassing my already high expectations. An unbelievable night that I will remember for a very long time.