Joker Opinion Piece: We Are The Monsters 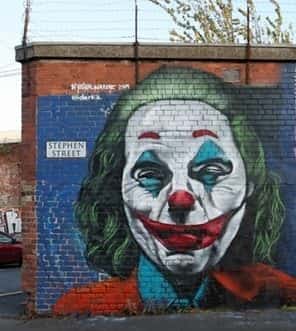 Before beginning this piece, it is necessary to state that this not going to be an average review in which I would talk about the shots, costumes and the camera lenses used to convey just how bleak and ruthless the city of Gotham is. Although touching on these areas will be unavoidable, the main aim of this piece is to tackle what I feel is the most important part of Joker: its message.
Although the majority of the population will expect to mindlessly watch what feels like the hundredth rendition of their favourite villain for pure entertainment, I do feel as though the message that Joker gives to its audience is inescapable.
As a minor disclaimer, I am not a self-proclaimed DC Comics fan, nor would I consider myself a member of the cult following (though I did enjoy Suicide Squad) and therefore I will not be comparing and contrasting Phoenix’s performance to Ledger’s or Leto’s.
When I discuss performance, I will be touching on Joaquin Phoenix’s performance and his only.

For context, Joker is a 2019 movie directed and written by Todd Phillips. It follows Arthur Fleck (Joaquin Phoenix), a failed comedian with a mental illness who goes on a downward spiral after being repeatedly abused and discarded by society.
Arthur’s trauma and loneliness leads him to revolt against those who have trespassed against him, ultimately descending into his alter-ego “The Joker”.

The opening sequence of the movie is one of the most powerful expositions I have seen in cinema. Arthur is dressed as a clown and parading a bright yellow sign on the streets of Gotham City. From this scene alone, Joaquin embodies who Arthur Fleck is at heart before his descent into madness: loveable, playful and innocent in his child-like behaviour.
Out of nowhere, and unprovoked, a gang of younger men steal his sign and knock him to the ground. Arthur desperately runs after them to get back his sign, eventually spotting them in an alleyway where the gang smash the sign over his head and begin to severely kick and beat him as he lays helpless on the floor.
Before Arthur even hit the floor, my eyes were flooded. Arthur did not fight back, and this is because when we first meet him he is not a violent person. Instead, he constantly reiterates his kind heartedness throughout the narrative, stating repeatedly that he was put on this earth to bring joy and warmth to a world so cruel and cold.

In another scene, Arthur attempts to play hide and seek with a young boy on the bus. His mother immediately turns to Arthur and tells him to stop bothering her child. Triggered by this response, Arthur becomes consumed by uncontrollable and pointedly inappropriate laughter. He hands over a note to this woman that states “I have a condition which causes me to laugh at inappropriate times”. The woman dismissively hands it back to Arthur after merely glancing at it and rolls her eyes.

The interaction between Arthur and this woman on the bus is very reflective of the society in which we live: an ignorant one.
When we look at social media platforms like Twitter and Facebook and see retweets and posts about how important mental health is, we automatically assume that this mirrors the world when in fact it doesn’t.
Fiction aside, if this exchange were to happen in real life, the majority of people would likely react the way said ignorant lady did; they would dismiss, condemn and be embarrassed by witnessing a mentally ill person like Arthur have an episode in public.

This leads me to discuss another scene in which Arthur is talking to his therapist. The therapist isn’t shown in a positive light; she is dismissive and seemingly disinterested with how Arthur is doing mentally, aside from asking “How is work?” and “Are you having any negative thoughts?”, to which Arthur responds: “I feel like you never listen to what I tell you, it’s always “How is work? Am I having any negative thoughts? You ask but never listen. All I have are negative thoughts”.
Apart from looking frightened, his therapist doesn’t have much to say, so she changes the subject and tells him that this will be his last therapy session due to the lack of funding by the state for mental health services. She tells an already hopeless Arthur that the state does not care about the mentally ill, or about social workers and therapists like herself. Arthur asks her how the institution shutting down will affect his access medication. Her response is an apology, and a very insincere one at that. 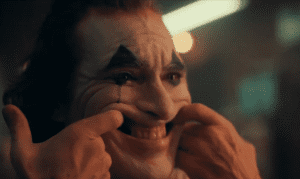 Joker is so much more than a film about a villain that is known the world over. It is about representing real life. The state and government do not care about supporting minorities and the mentally ill, no matter how many times they claim that they do. The continuous funding cuts to mental health services by people in power mean that those who suffer from mental health issues have to wait an absurd amount of time to get the help that they need. In some cases, by the time the wait is over to get counselling or medication, the sufferers have not only lost time, but their lives. Those in power are more interested in using their money to make the rich businesses richer. They would rather invest money in a big business like Google to make more money, rather than give that money to those who’s mental health is dangling by a thread. And people are dying because of it.

To state the obvious, there is so much hate and violence going on in this world, and Joker represents that. It makes the point that the people in this world are what cause this violence and hatred. In one of the movie’s climatic scenes, three rich white-collar men witness Arthur laughing on the train. Rather than showing some empathy, one of the three men pulls out his iPhone to document the other two invading Arthur’s personal space and taunting him with a song about clowns. When they fail to get a reaction, one of the men punches Arthur square in the face, signalling the start of Arthur’s descent into the Joker when he finally snaps and kills all three of them.

This scene ignited so much anger and upset in me; the fact that there are people out there that think its okay to bully other people and attack them for their own amusement. And sadly, it seems in this day and age that more people gain pleasure from videoing violence on their iPhone than helping those that the violence is being inflicted upon. We like to think that we are a progressive and empathetic society, and I disagree that we are.
We like to think that we are understanding of mental illness, but fail to be there for our friends in need. We like to think that society is anti-bullying, yet there are men like those three on the train who get pleasure from beating and mocking those like Arthur.

As someone who has dealt with mental health issues and trauma, I truly felt for Arthur. I agonised over the abuse, dismissal and mockery that he faced on a daily basis. That is what I feel Joker is about: the human experience. It is one of those films that begs us to ask ourselves: “How would I feel in this situation?” Of course one of the major factors of this is the stunning, frightening, authentic and raw performance is given by Joaquin Phoenix. While all of the actors give a performance worthy of acknowledgment, they do not match the caliber of Phoenix.

Finally, I wish to discuss a status I saw on Facebook that gave me the inspiration to write this piece. The person who wrote this stated that Joker represents how ignorant society is. That in society, people like to think that monsters are born, their pathology determined. He argued that monsters are often made through years of unresolved trauma, neglect and lack of access to health care and empathy. People like to believe that monsters are born as such to alleviate the burden of taking responsibility for them.

Going forward, we as a society and as individuals need to check ourselves. Everyone is going through something you do not know about. That stranger you sat next to on your way to work could be battling bipolar disorder, that barista who handed you your coffee with a smile on her face could have recently lost a family member. We must do better and be kinder to each other. It’s all well and good saying you support mental illness, gay rights, people of all skin colours and religions on social media, but make sure you do so in real life too and be kind to people. Most importantly, show empathy. Perhaps one day we can live in a world where people watch a movie like Joker and engage in dialogue about the statements it makes about the world and mental health, rather than comparing it to the comic books.