Review: Cloudy with a Chance of Meatballs 10th Anniversary 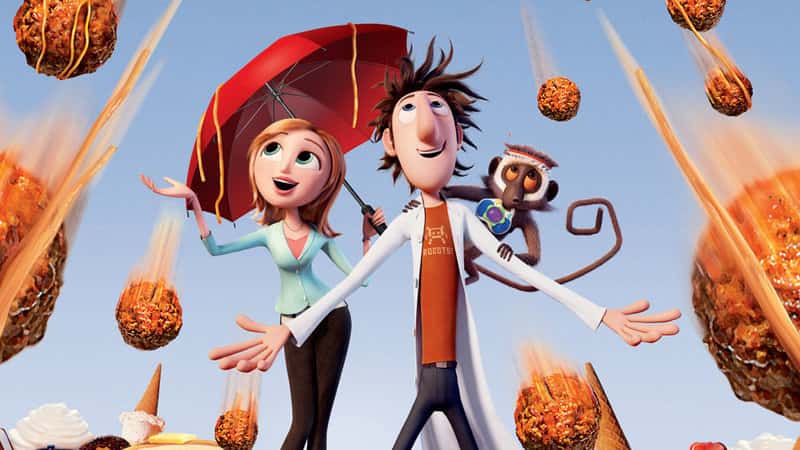 I feel it an honour bound duty to head back into the films I missed as a child, and Cloudy with a Chance of Meatballs was by far the biggest excursion I had yet to tackle. Aside from all the Disney animated classics I still haven’t seen, the only non-Disney films I could think of were this and The Road to El Dorado. But with such an incredible cast, it was hard not to dive into Cloudy with a Chance of Meatballs with anything but a positive attitude.

A shame then that the cast isn’t utilised to its full potential. It’s always nice to hear Bruce Campbell pop up in anything outside of horror shlock and made for TV movies, the man is a real talent and his role as Mayor Shelbourne is a great addition to his filmography. Campbell ramps up an enjoyable role and plays well alongside voice acting veteran Bill Hader, Mr. T, James Caan and Anna Farris. A truly incredible cast that has a few other big names littered in there too, but it’s a shame that the direction of Phil Lord and Christopher Miller can’t quite bring about any success.

Hader’s leading role is quite the surprise, especially since before and after his performance as Flint Lockwood, he has been relegated to mere supporting roles or extra voices. He’s turning into a Frank Welker style performer in that regard, always present but never noticeable. Nothing wrong with that, it’s just a shame given how talented he is, and his leading role here does manage to prove that somewhat.

By far the biggest strength of the movie is its animation style, which looks impressive even a decade later. It has that turn of the 2010s charm to it, looking better than Ice Age but not as good as Toy Story 3. A weird category to place a film into, but Cloudy with a Chance of Meatballs manages to survive somewhat on its great animation style. But where its stylish looks will bring it up a peg or two, its lack of jokes will bring it crashing down.

The strangest thing about this film isn’t its premise of food falling from the sky, but its obscure reference to Welcome to Mooseport (2003), which I thought was quite honestly the funniest part of the movie. Aside from that joke, there’s little to laugh at in the debut of directors Lord and Miller, two men who just can’t seem to crack the balance between great animation and a good script. A real shame, making Cloudy with a Chance of Meatballs a truly forgettable movie.