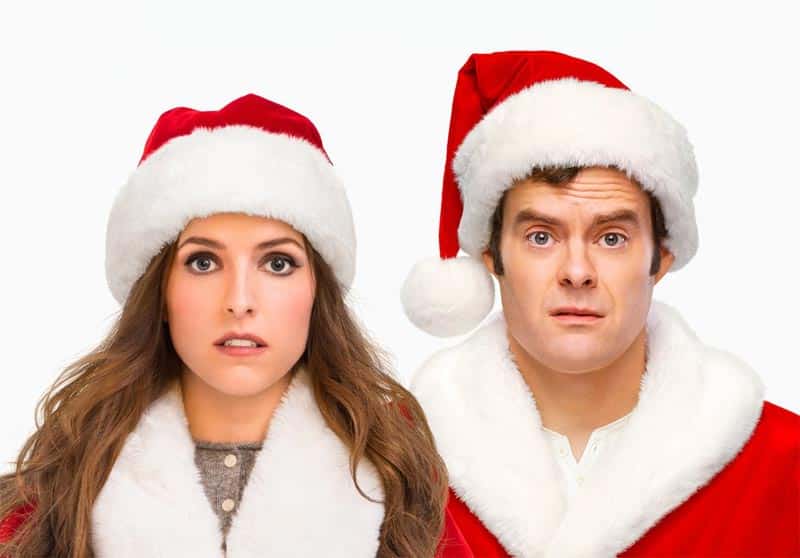 The onslaught of Christmas begins, and while families begin to celebrate and prepare for the most wonderful time of year, I sit at home, alone, watching straight to DVD Christmas movies while I drink eggnog out of a wine glass to make it seem like I’m having a merry old time. Christmas (and more importantly my birthday – yes, they’re the same day) is a wonderful time of year where people come together, sit in front of their HD TVs and watch classic Christmas films. But every year there are attempts at remaking the classics, or at the very least an attempt at making something completely new. Noelle is just that, straight from the hellish conveyer belt of Disney comes a horrifying display of what happens when you get some talented individuals together to make a by the books Christmas family affair.

Starring Anna Kendrick and Bill Hader, we follow Santa’s daughter and son team as the big man himself decides he’s done enough Ho Ho Hoing for one millennium and hangs up his token red hat and jolly black boots. Noelle (Kendrick) and Nick (Hader) are tasked with taking over Santa’s strict regiment of Christmas preparations before the big day inevitably dawns upon them. Disaster strikes when Nick flees to Phoenix as a way of avoiding his inherited slavery into the Christmas tradition. The first film that director Marc Lawrence has helmed that doesn’t feature plucky eyed starlet Hugh Grant, Noelle looks to cash in on the hype of Christmas before it’s really even started.

They may as well have released Noelle in October, or June, because the middle of November is a time that isn’t just plagued by massive Academy Award hopefuls, but it’s also a time when people are just coming into the idea of contemplating festivities. To drop a full feature length focusing on Christmas is a bold move, sort of like starting a political discussion with your relatives over Christmas dinner or insisting that cauliflower is traditional. Either way, Disney have made a bold statement by dropping this car crash of a film into my viewing schedule, and I’m not sure whether I love them for the braindead entertainment break or loathe them for attempting to cash in on Christmas this early on.

Kendrick and Hader are as enjoyable as you would expect them to be. They’re incredibly great performers, underrated in both of their respectively unique fields of work. It’s a shame that films like Noelle will only go on to hinder them in their immediate careers. Hader needs that ever so lovely silver lining of dramatic films, with Kendrick providing that in last years A Simple Favour. The two have some great abilities, so it’s a definite shame that the script here really lets them down. A strong supporting cast is included too, with fans of the classic slapstick one liner thrill ride Airplane! receiving a brief role from Julie Hagerty. Billy Eichner also features as Gabe, continuing his consistency in supporting mediocre Disney films with middling performances that don’t quite give us the range that his role in Parks and Recreation did.

A complete sham, a cliché mess that provides nothing unique or genuinely fascinating to the miserable experiences that these Christmas films provide. The Christmas themed one liners get annoying rather rapidly in a film that has as much enjoyment as waking up on Christmas morning to see that instead of presents being left under your tree, someone has stolen your floorboards. Sadly unoriginal, sometimes I wish those hardened extremist Christians would keep ploughing away at saying films like this destroy the real message of Christmas. Maybe, just maybe, their limited efforts would’ve stopped such a dreadfully bland movie.