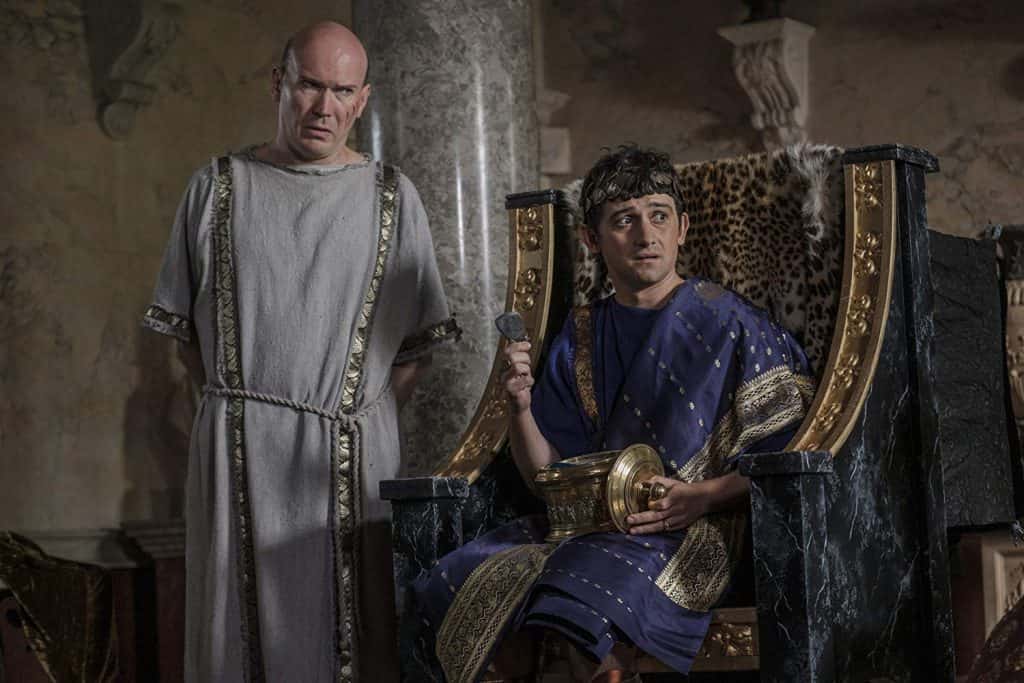 Growing up, I’m sure everyone my age or near enough to my age thrived on Terry Deary’s Horrible Histories series. The books were superb, forming my interest in history, follow that up with a television adaptation of a great book series and you have a recipe for success. An incredible blend of well written sketches and factually accurate pieces to engage with a younger audience that may be interested in history. It was a great blend, and possibly one of the reasons I have such a fascination with general history. Embarrassingly, I was excited for Horrible Histories: Rotten Romans upon its release. How times have changed, this expectedly dreary big screen adaptation of the brilliantly nostalgic television show is a clustered mess of a film.

Starring an ensemble of British comedians that’ll make you think of better projects they’ve appeared in; Horrible Histories’ big screen debut is littered with talented individuals that don’t bring any of that to the screen. The likes of Craig Roberts, Kim Cattrall and Nick Frost present themselves in solid enough roles that fail to expand on anything more than a small handful of one liners, many of which don’t land. Much of the humour within the film would work; given to the right comedian it would. While it’s always nice to see the likes of Warwick Davis, Lee Mack, Alexander Armstrong and Chris Addison it’s unfortunate that they aren’t given much else to do outside of one or two scenes. Instead they’re relegated to the backbenches, as unknown newcomers Sebastian Croft and Emilia Jones look to carry the film.

They don’t manage to do so, the film quickly becomes a strange buddy cop road trip as Atti (Croft), a Roman soldier, is kidnapped by English barbarian Orla (Jones). From there, their ransom conspires into a plan to send Atti back to Rome and to give Orla the credit she consistently demands from her father, Arghus (Nick Frost), but doesn’t receive because she’s a woman. I think that’s the reason anyway, it’s not like the film hammered it home constantly and consistently. Some of the jokes are well written, but many feel forced or out of place. This consistency in providing the same few handfuls of material over and over is felt in other areas of the film too. Mack has a fairly funny bit where he envisions the perfect Rome, one that he will return to after one final battle. Every time someone (mainly himself) mentions Rome, he looks wistfully into the camera, talking of the vineyards and beautiful culture he longs to return to. It’s not as funny when you’ve heard it the fourth time in the span of twenty minutes though.

Under the impression that the key to comedy is repetition, writer Jessica Swale fails to bring more than one or two jokes to the piece. She doesn’t quite capture the charm of Horrible Histories, and her focus towards orienting the piece towards solely children and leaving out the wry and disgusting humour of the television show and books is the biggest detriment to her writing. On the television show, the likes of Simon Farnaby and Mattew Baynton (who are both sadly absent from the film) bring about a touch of class to jokes that would be effectively childish. With the film, the writing is essentially ‘isn’t wee funny’ and then leaves it at that.

Maybe missing so much of the television show was for the worse. A detriment to what could be achieved by the filmmakers. Bold, certainly, to include very little of what made the show so interesting and enjoyable, but dumbing it down to pedantic behaviour from its characters and a loose script that looks to cater to its variously brief cameos is a recipe for disaster. That’s exactly what Horrible Histories: Rotten Romans is, a rotten piece of cinema that does nothing to celebrate the horrors behind the history, nor does anything to effectively call back fans of the television series.