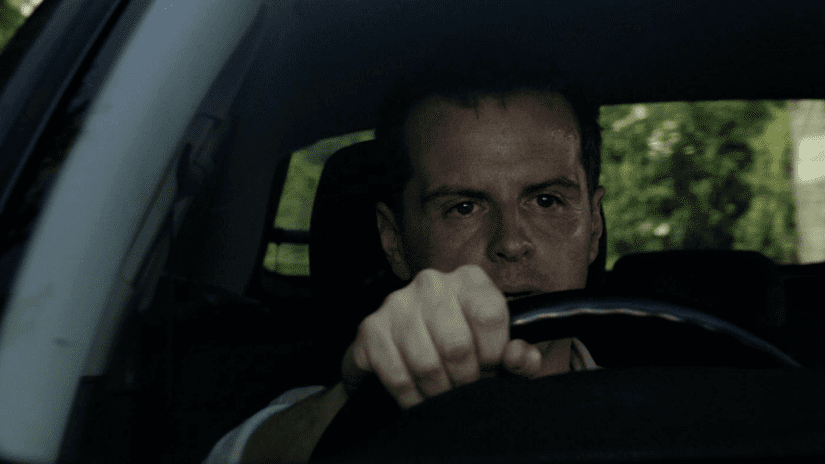 If there’s one thing writer Charlie Brooker has taught us its that time and consistency are two completely unrelated items. Now into our fifth season of the once frightening Black Mirror, we see what happens when a product lives on past its expected lifespan. A series that felt unnecessary right after its Christmas special, the show has limped on with dire attempts at reviving the eerie and ominous presence it once held when it was first broadcast. But we’re far away from the glory days of episodes like The National Anthem and White Christmas, we’re now left with scattered messes like Smithereens, one of only three episodes in the newest series.

Andrew Scott and Damson Idris both star in surprisingly great roles as a cab driver (Scott) takes an intern of a social media company (Idris) hostage. His demands are quite simple, to speak to the owner of the company. Why? I’m still not sure, but I’m presuming it has something to do with his cliché, sordid past that is hidden and masqueraded for much of the episode. Scott is a great performer in most of his works, Smithereens is no expectation, Idris’ inclusion is also well formed and the two have some great scenes with one another. Considering we’re contained in the car with the two of them for much of the episode, it’s probably a lucky draw that they’re both the best part of the episode.

But when we’re not in that car, trapped in there with a hostage situation, the episode nosedives. We go through the traditional Black Mirror formula of supporting characters not having much use, flashbacks to happier times and the consistently shaky twist that feels more like a curse to each episode than anything we could be surprised by or enjoy. We cut away all too often to other side characters that are as forgettable as the twist that brought us to this situation in the first place. Most of the action takes place through telephone calls, the fear that this delusional cab driver could in fact do something drastic. If this were a short film then this would’ve worked an absolute treat, but stretched out to the seventy-minute running time and the plot begins to wear thin almost immediately.

Too little time is spent building up our leading characters, too much time is spent dealing with the consequences of their brief actions. We spend so much time with these characters that you’d think we’d learn at least something about them. We don’t. But then again when have we ever learnt anything of the characters in the latest seasons of Black Mirror. It has turned into a show that looks to strike fear into the hearts of anyone remotely in contact with technology. We may only look back to the brief glimpses of brilliance the show first provided us, because the real terror now isn’t technology, it’s the premise that they’ll continue to make more episodes of Black Mirror.