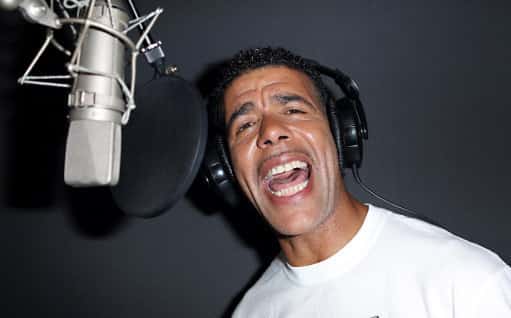 He may not spot sending offs, goals, or sometimes even Jeff Stelling shouting at him from the studio, but it’s safe to say that Chris Kamara hasn’t missed a trick with his debut album. Snap your Full Deluxe Edition of Christmas by Michael Bublé in two (because Christmas is the only time people buy actual CDs), throw it into your log-effect fire, then stick on Kammy’s masterpiece.

Although he didn’t write any of the songs himself, with the backing of a bombastic swing band Kammy makes every single yuletide standard his own. From the moment he starts with Let it Snow, we wish we were in his cosy cabin sharing the corn he’s brought for poppin’.

At his rendition of Rudolph the red-nosed reindeer, you’ll be seeing the red lights of Santa’s sleigh in the sky… oh no wait, they’re just satellites. But it’s nice to pretend. By the time you get to the closing track, Have Yourself a Merry Little Christmas, you might have even shed a tear or two (if the mulled wine hasn’t worn off by then).

Like Kammy announcing that Barnsley have scored a 96th-minute winner against Southend, his Christmas album is sure to fill you with joy (unless you’re a Southend fan). Surely in time, this will be held up next to Fleetwood Mac’s Rumours, Pink Floyd’s Dark Side of the Moon, and the Rolling Stones’ Exile on Main Street in the pantheon of the greatest albums of all time. Unbelievable, Jeff!

One Response to Album review: Chris Kamara – Here’s to Christmas