Frank Turner’s No Man’s Land tour was unlike any other shows he’d done before, stripped back to a bare minimum for an all-seated, intimate concert that fans of all ages should enjoy. The basis of the show was set in two parts – a solo acoustic run-down of his newest album No Man’s Land followed by an unplugged style set with Turner’s backing band The Sleeping Souls. 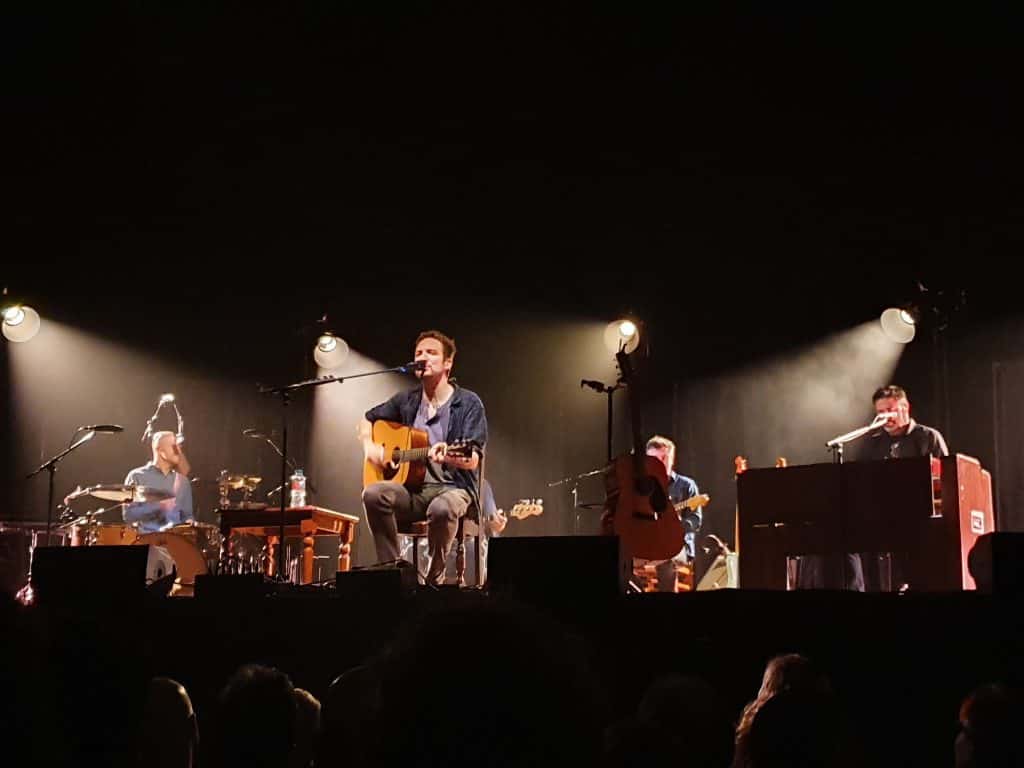 My initial feeling was quite hard to place – I was excited, but something felt a tad off. However, I kept my head up, begrudgingly paid £10 for a jacket patch, and made my way to my seat, which was incredibly close to the stage to say I’d gotten my ticket from a random stranger that night. Cheers Karl!

The first person to grace the stage was the support act, an Australian singer-songwriter by the name of Emily Barker. She played her soft folk songs under a  spotlight with an acoustic guitar, stopping only to sing a haunting rendition of Precious Memories – a gospel hymn famously covered by Sister Rosetta Tharpe. Perhaps if I’d have known a little more about Barker, her set may have brought me to tears, but I’ll settle for the chills I got instead. 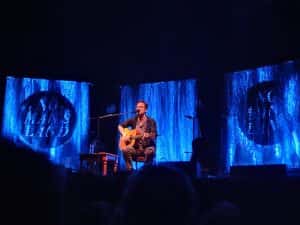 After a quick break, Frank Turner made his way to centre stage, backed by a somewhat lacklustre whooping from the crowd. He kicked off the show with Jinny Bingham’s Ghost, then used his passion for history to educate the crowd in between songs. He told tales with I Believed You William Blake, The Hymn of Kassiani, The Lioness and the The Death of Dora Hand – with an honourable mention to the legendary Sister Rosetta. Midway through the set, we were treated to Turner’s song The Graveyard of The Outcast Dead, which I personally think stands as a better Christmas song than anything released in the last decade – even with the themes of prostitution and death. By the end, the crowd had warmed up significantly more and were ready for the second half.

The second act saw the addition of The Sleeping Souls, Turner’s backing band, and followed an autobiographical story through his life. He covered relationship troubles with songs such as Substitute, Isabel, Redemption and the complete ‘Amy trilogy’ of songs before moving onto the cheery topic of death with One Foot Before The Other. In between songs, Turner peppered the set with anecdotes about his life which, with the seated acoustic set-up considered, felt incredibly intimate and special – like listening to a relative recap memories that you were part of. He took over Matt Nasir’s role on the piano to play There She Is – a song written for his wife as a romantic gesture – and between the story behind it and the performance itself, it was warming and sweet. Everyone stood for Photosynthesis as the lyrics demand, although I was gutted that no-one was dancing, and remained standing until the end of the set. The performance was finished off with Be More Kind, a touching tribute to Clive James, one of Turner’s inspirations who had died earlier that day.

Overall, I left the concert with a post-gig buzz, incredibly happy with the performance and semi-disappointed in myself for doubting the concept. I’d be comfortable watching the set ten times over!