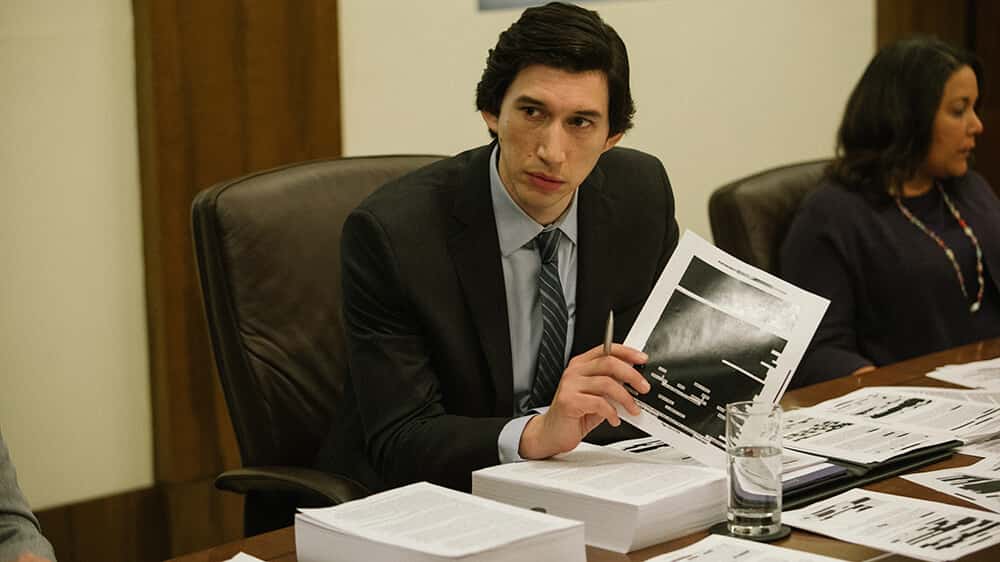 Adam Driver really wants an Academy Award. I say this as I look through his listed filmography for the past two years. He’s came close to a Supporting Actor win for his role in BlacKkKlansman, however I sense that this wouldn’t have been enough to feed his hunger for the golden statue. His work on The Report sets him up for some award contention, or at least it would’ve if he hadn’t blown himself out of the water with the upcoming Marriage Story, which has been slated for nothing short of critical, public, worldwide and universal acclaim. Still, if that tanks then Driver has certainly prepared himself with a suitable plan B in the form of The Report.

Following the breakdown of the illegalities of the Iraq War and the torture methods that were thrown into that mess, The Report follows Daniel Jones (Driver) as he discovers the unflinching truths of what really happened to those captured by the United States government. Following the pressure on Jones to deliver a report that proves what has happened, and also the opposition he receives from the American government, The Report is an interesting piece of film that manages to give us a positive spin on the emotive response frustration can bring to a task.

Maybe it’s because I’m a nerd for political history, but pairing The Report with this year’s Official Secrets was a certainly rewarding experience. Both tackle similar enough subjects, set within the same period of history as they dissect the illegalities of the war in Iraq. One focuses on a woman’s prerogative to serve her country, the other focusing on a man’s findings and how they lead him deeper and deeper down a horrifying rabbit hole.

Driver’s performance in this is truly incredible. I expected nothing less than absolutely mesmerising displays of some of the finest acting to date, and I wasn’t let down. He gives off more or less the performance you’d expect from a political biopic, his work here being both enjoyable and engaging with the story at hand. There’s something quite terrifying and ominous about the situation he finds himself in, at odds with the American government. Driver is highlighted well under the direction of Scott Z. Burns, a man that provides very little evidence of his previous work.

That’s not necessarily a bad thing though, and while The Report is certainly not without its problems, it does manage to bring a concise look into one of the most aggressively confusing and intense topics of the past twenty years to the forefront of our minds. Attracting the likes of Annette Bening, Jon Hamm and Ted Levine is no small feat, especially when they’re essentially small cogs in a much larger scene. They all perform to the best of their abilities though, there was no doubt whatsoever that they wouldn’t be giving us the very best that they had to offer. Even Tim Blake Nelson and Corey Stoll pop up for a few brief scenes. A stacked cast, more often than not, provides nothing short of excellent results.

The Report is a film that cannot avoid picking a side. The second Dan Jones appears on the screen and we hear Adam Driver open his mouth, you can tell the film will be fighting the good fight in seeing that the report Jones concluded his case study with sees the light of day. It’s an interesting piece, a great biopic for those (like myself) that aren’t fully clued up on this intensely difficult tale of torture and terror. If anything, The Report isn’t just a great Adam Driver vehicle, it’s also a great place to start if any of the Iraq War interests you.