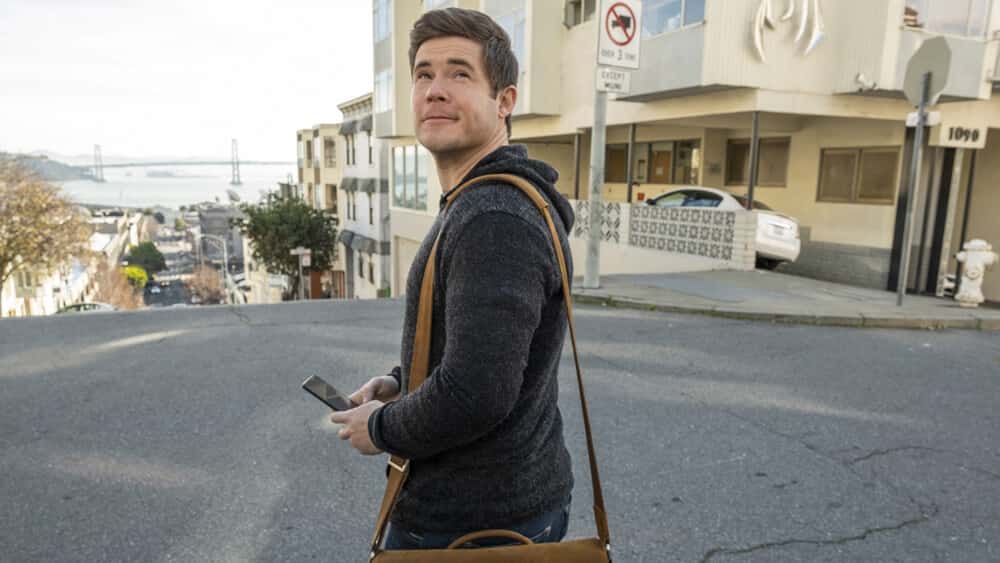 It takes exactly three minutes and forty-six seconds for Jexi to squander itself as an out of touch film that looks to leap on the memes of yesterday and bring them to the front and centre of what Hollywood and Amazon executives believe to be “hip” and “edgy entertainment”. In turn we receive a product that would’ve felt out of place six years ago, let alone today. The best film to come out of directing pair Jon Lucas and Scott Moore, Jexi feels like a step in the right direction, or at least it would be if it weren’t completely asinine and useless.

Adam Devine and his punchable face return to the screen for yet another leading role, handed down to him by executives left with their only other leading man choice being a bucket with a face painted on it. Possessing as much talent as such an item, Devine weakly makes his way through a film whose premise is as cutting edge as a plastic spoon. The only saving grace throughout a film deserted of any meritable or recognisable talent is the running time, short enough to stop me from pulling my hair out or throwing myself from my window. Michael Pena also appears in a role that is so purely different to anything the man has ever accomplished before it’s almost otherworldly to see him within the prison like confines of Jexi.

Is the life of Phil (Devine) the life that awaits me once I graduate from my journalism course? As he aptly puts it, “I majored in journalism and now I write lists about cats”, something I could probably do but with the grimaced expression of someone having a melon shot at them from a cannon. Jexi is quick to establish the terrors of technology and how only the most annoying of people will open apps, not by clicking the icon with their finger, but by asking Siri to do so. Either way I can think of no better vehicle for Adam Devine to represent than that of someone whose only characteristic is an attachment to their telephone. Still, its commentary on technology is still better than most newer episodes of Black Mirror.

A huge problem Jexi has isn’t with the jokes it looks to provide us with, but with a lacking awareness of when to end them. Some jokes could be fine as little one-liners, but I assume for the intended audience it isn’t good enough to provide any form of subtlety or nuance, instead Jexi feels the need to hammer home any piece of comedy that could have a semblance of humour to it. There’s something I enjoy about the twisted notion of Adam Devine being sworn at and controlled by his phone, randomly voiced by Rose Byrne of all people. It’s like those Satnav’s you can buy but the voice is Austin Powers or Mr. Bean. Come to think of it, it’s exactly like that but as a film.

What could’ve been a generally pedestrian film soon falls to cliché and random acts of boredom. As all American comedies fall to the low standard set by the modern comedy industry, it’s not really that big a surprise that Jexi looks to perform the bare minimum it can get away with. A romantic subplot is thrust upon us, there are the inevitable annoying supporting characters that somehow exceed the invariably bland, mass marketable leading character and for the most part it all comes together as appropriately as such a boring product should.

For some reason though, I really can’t stay all that angry at Jexi, a film that is as contemptible and stupid as its title. The sheer fact that there are moments in this film of relative humour and competence surprises me, and that surprise actually left me a bit stunned at times. I laughed more at this discount remake of Her than I did at a lot of Netflix original comedies, not a high bar to overcome, but a bar nonetheless. Adam Devine is berated by a knock-off version of Siri for an hour and twenty minutes, it’s a bad film on the whole but it’s also a personal dream of mine.