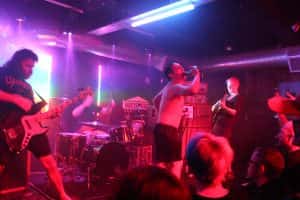 Instrumentally, this song is amazing. Christopher Morley brings us into the track with some incredibly fast and hard-hitting solo drumming, while maintaining a sense of anticipation as to what we can expect to hear next.

All of a sudden, we are treated to a beautifully rich guitar and bass duo with a similar sound to more well known songs such as ‘The Immigrant Song’ or ‘War Pigs’, which hints at the band’s heavy metal influences being artists such as Led Zeppelin and Black Sabbath.

The song builds to a high-powered, high-speed crescendo before descending into a slow chest-rattling slog of thick bass and cymbal-heavy drums. The sheer weight of the final quarter of the song is something that I can’t help throw myself around to, conjuring an image of a mosh pit filled with long-haired rockers all headbanging at the same time.
If I could listen to an instrumental version of this song, then I’d be very happy with it.

Where I consider this song to fall down is its lyrics, or lack thereof. Lines are few and far between, which in my opinion doesn’t make the song any worse as the instrumental is enjoyable in its own right, but they come across as empty and stereotypically “metal” with no real intent or feeling. I have spent a lot of time searching for meaning in the lyrics, and other than simply trying to find a reason to live, there seems to be no rhyme or reason to the words chosen besides providing some unnecessary edge to an already good song.

The band have said that this was one of the songs from new album ‘Vicerals’ that came together the quickest, and I unfortunately think that it shows. Despite the instrumental, I have come to dislike this song for Matt Baty’s particularly raw, chaotic voice and their slapdash lyrics and wish that the song’s cathartic intention paid a little more attention to the meaning of  its words.

The one major redeeming quality of this song is that it sounds absolutely fantastic live, but to consider this we also have to consider the atmosphere and stage presence as defining factors to its quality. Without the bonkers staging and performance, the song just doesn’t seem to live up to expectations. I am going to wait tentatively to hear the whole new album, but in regards to ‘Reducer’, I am critical and a little disinterested.