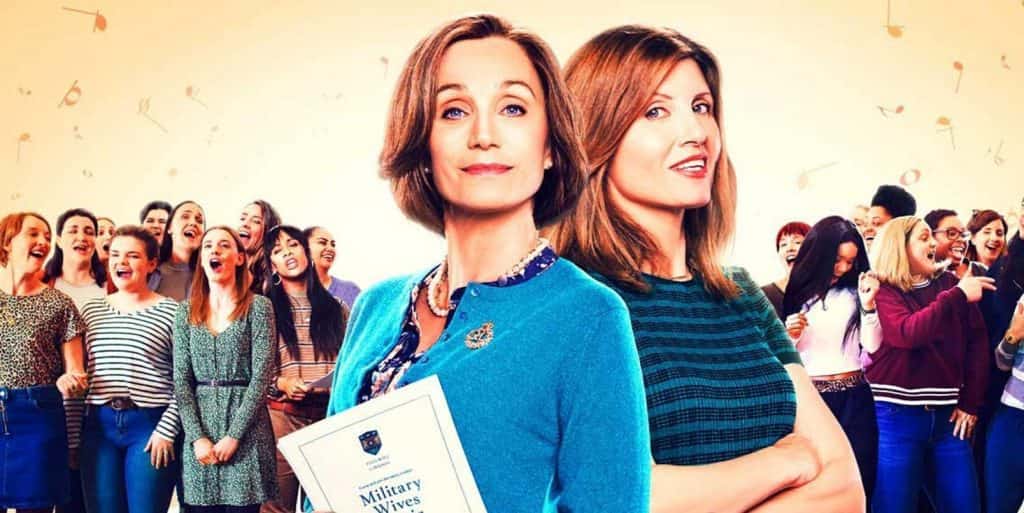 The silver lining of this recent pandemic is that I no longer have to traipse through murky streets and torrential rain, only to reach a cinema where I pop myself down in a seat and sit through absolute misery and disappointment for two hours. Thanks to digital releases, I can do so from the comfort of my own home in my pyjamas, sipping a nice cup of tea and think about all the other films I’d rather be watching than Military Wives, another biopic to add to the ever-growing pile. You can’t knock the title, which essentially sums up the entire experience of the film as we follow a group of military wives banding together to form a choir group.

It’d be exceptionally fluffy viewing, a film so completely harmless and plucky that casual moviegoers would have no trouble engaging with it for an hour or two. Yet Military Wives is an emotionally manipulative husk, a barebones take on a story far more interesting than the one presented to us here. Directed by Peter Cattaneo of The Fully Monty acclaim, Military Wives looks to present a variably wide range of stories collected in pockets all around the country. It takes the form of many different tales, tragedies and concepts from a number of men and women who have to deal with the longing they hold for partners off serving in conflict abroad. It’s a goldmine for storytelling style and could easily hold a great deal of substance to it.

None of that makes it into the final product though, which in turn becomes a meandering colletion of scenes that vaguely resemble an innumerable number of subplots. We leap from scene to scene as the movie tries to figure out which tone it would like to encapsulate. From time to time we dive into the deepest recesses of emotive displays in characters that had only first appeared one scene ago. Other times see these characters laughing and joking with one another, presumably in a way for the film to collectively build up the obvious camaraderie they have for one another. It all feels so generic and overdone that what little charm the film could’ve held is washed out completely by performances that do very little to inspire anything creative at all.

All of this would’ve come together with at least some form of discourse if it weren’t for such bland, two dimensional performances. Bland caricatures that boil down to one ineffective character trait per role. One of the wives is involved in football, so her entire character is based around her enjoyment of sport and England. Another character is married to the colonel, so of course she’ll be stuck up and stuffy at first until a debilitating scene brings the good out of her. It’s all very by the books, and leading ladies Sharon Horgan and Kristin Scott Thomas do absolutely nothing of note for near enough two hours.

This is the sort of film your elderly relative may find some enjoyment in. Military Wives is an absolutely docile time, attempting to do nothing but coax its audience into feeling bad through some emotionally manipulative scripting. The predictable highs and lows are prevalent throughout, making for a painful film that looks to adapt real-life stories of the pain and hardship of the wives of servicemen in as generic a fashion as possible.