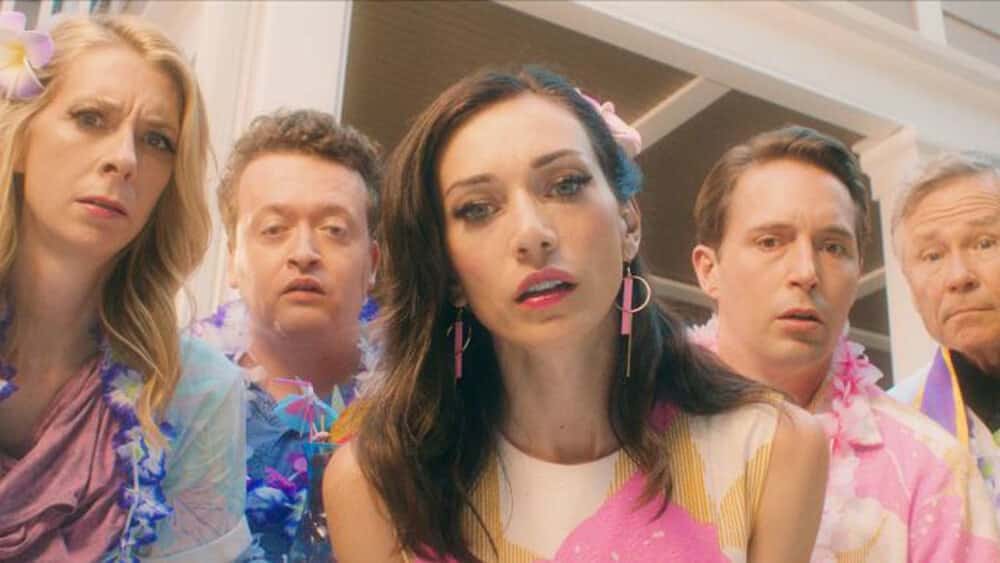 Suburban life and its cushy position in film is something I’ve been vocally critical of for some time. Over and over we absorb the lives of middle-class America in films that look to depict safe stories of struggle without hardship. What I needed to combat this was a hefty injection of surrealism, narcissism and satire of the genre I love to loathe. Greener Grass was not at all what I was expecting it to be, in fact it couldn’t have been further from what I had expected from this recent film by directing pair Jocelyn DeBoer and Dawn Luebbe.

Following the lives of a handful of suburban mothers that all socialise at their children’s football practice, Greener Grass opens up on the extraordinary being treated as the norm. Within our opening scene, lead character Jill (DeBoer) has given her baby away to Lisa (Luebbe). Adapting the short film they both appeared in a few years prior, the overly glossy visuals and unusual norms of this group make for a gorgeously unique film. With credit to both its engaging direction, its saturation and utilisation of bright, primary colours and the cast members who manage to pull it off without a cinch, Greener Grass becomes something that far exceeds anything it should be.

Rather than being yet another American jab at American culture, Greener Grass feels truly worthy of taking on such a prevalent style of storytelling. The performances teeter on thoroughly enjoyable, a nice disconnect with what is socially acceptable and genuinely concerning mannerisms. We spend much of the film with Jill, who progressively finds herself in a worse state than previous scenes. Great supporting performances from Beck Bennett and Neil Casey go a long way in establishing the world building of this fictional community. They’re on-hand to lend themselves to some of the more vibrant, reality breaking scenes, and by the looks on their, are more than happy to go along with the feverish happenings of this sleepy suburban nightmare.

But too much of a good thing can lead to a complete imbalance. Greener Grass takes these weirdly charming anecdotes and pieces in its stride, normalising them as much as possible whilst at the same time continually adapting their devilish charm. So many events and occurrences are dumped into only ninety minutes worth of film, and it soon becomes a matter of sifting through the wreckage of ideas, rather than a fulfilling few that work without issue.

Letting the cultural jabs and surrealism overtake the plot and its various storylines, Greener Grass is a solid deal of fun that begins to lose steam towards its ending. An aimless final act prevents the film from reaching the socially charged criticism it was building up to. Beginning as a nail-biting satire and ending on a rather dud note after such an intensely enjoyable build-up, Greener Grass provides an example of how being surplus to requirement and overstating your message can lead to disastrously fumbled endings.