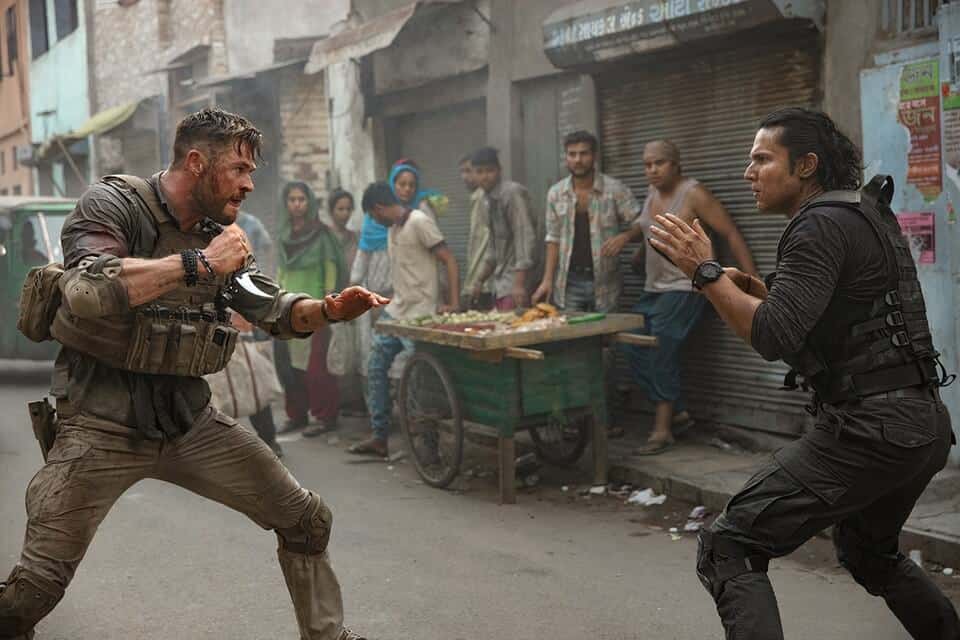 Sometimes all you need is a brain-dead action movie. Netflix provide a lot of brain-dead content, more so as of late than ever before. Dribbling out The Main Event in a spectacularly dull fashion to the critical response of a collective shrug of the shoulders. Tiger King has allowed Netflix to ride the wave of popularity once more, which is surprising since it isn’t actually all that good. But blindsiding a good chunk of their audience to usher in some smaller releases or films that they didn’t fully believe in has its benefits. Whilst most are giggling away at Carole Baskin, I had the pleasure of sitting down for a viewing of Extraction, the most recent Chris Hemsworth action vehicle.

As far as action-oriented films go, Extraction hits all the right notes in a relatively safe yet frankly clumsy manner. We have a clear and simple goal of extracting a child hostage, and for the remaining hour and a half, we follow Hemsworth’s hard as nails portrayal of former mercenary Tyler Rake. Shallow in depth and carried wholly by the surprising dedication Hemsworth has for the role, Rake is an extremely generic action hero, one that I doubt we’ll remember the name of any time in the near future. His performance is everything you would expect it to be from a film that takes itself far too seriously. No funny quips, nor a single glimmer of light-heartedness to break up the pacing bit, just full-blown energy and gritty surroundings. I can’t help but give props to director Sam Hargrave who, on his debut, finds a nice balance between basic storytelling sequences, solid action set pieces and some trivial yet unexpected camera work.

Extraction may not be the heavy-hitting piece of action cinema it could’ve been, but for a debut feature film, Hargrave really outdoes himself. He throws in a handful of really interesting camera shots, especially in the initial chase sequences. These visual treats are unfortunately drowned out by the drab colour scheme, inherently repetitive and formulaic story and some otherwise generic camera movements that throw away any sense of unique expression.

There’s nothing within Extraction that you haven’t seen before, yet the leading performance of Hemsworth is enough to keep it from falling apart. There are more than a handful of plodding moments, forgettable side-lines, subplots, and alleyways that make the film feel a lot more bloated than it has any right to be. Clocking in at two hours when the story could’ve been told in half that time at a push is no way to manage the time of the film. Still, most films this year have bored me to tears, it was nice to watch something that had a lethal injection of tremendous action, because it was more than enough to elevate it above a great deal of Netflix originals on offer currently.