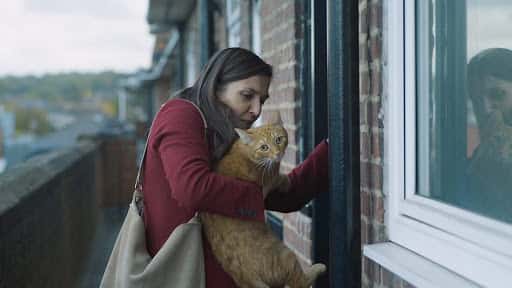 The divisions we feel in the country and the world currently are dominating not just the news, but film as well. You’re never more than one step away from diving into a film that turns out to be a meditation of political ideals instead of the low-brow comedy you had first expected. Political events are cannon fodder for up and coming filmmakers because it gives them an issue or topic that can be universally identified and discussed. Cat in the Wall makes such a leap, picking a topic that requires no introduction.

Conversations on Brexit, immigration and class divides come out of nowhere, with the film never giving these subjects the depth they need to be even slightly interesting. Cat in the Wall doesn’t have the strong writing necessary to open up the debate on important issues, opening itself up to an echo chamber style of storytelling. Some scenes feel like they’d be better suited to a low budget documentary, the flimsy storytelling style lost to a wave of pro-European advertisements. That may be the political position the film wishes to take, but it feels like it puts these political aims ahead of directing us through a relevant, timely or interesting story.

We’re presented a leading character that is so truly disconnected from reality. Comparing the issue of having a cat stuck in their wall with murder or permanent political divides is a tremendously hilarious comparison, but it’s one that Cat in the Wall makes with genuine passion. Having a cat as the metaphor for just about any sort of message the film has on offer is a mind-bending process that wouldn’t work even if the performances were more than competent. Each subplot or character feels like they have a completely random spurt of interest in their story, only to fall right back into a cesspool of mediocrity. Performances that feel more like they’ve picked someone randomly off of the street than brought in an established, little known actor.

Its dialogue on political issues comes out of absolutely nowhere, stemming from the ruffling of feathers in an apartment block. Lengthy discussions without any real depth, Cat in the Wall presents issues as caricatures. The elderly woman that can’t get out of bed in the morning, so she relies on medical marijuana. A rampant issue of rising crime and unsafe upbringings, but with no real reason to care for it given how unlikeable the characters all appear. A mixture of poor performances and writing that believes it’s doing some good make for an annoyingly boring watch. Far too on the nose for what it looks to discuss, and ridiculously disconnected with reality, throwing a handful of negative stereotypes into the mix, doing more damage than discourse.