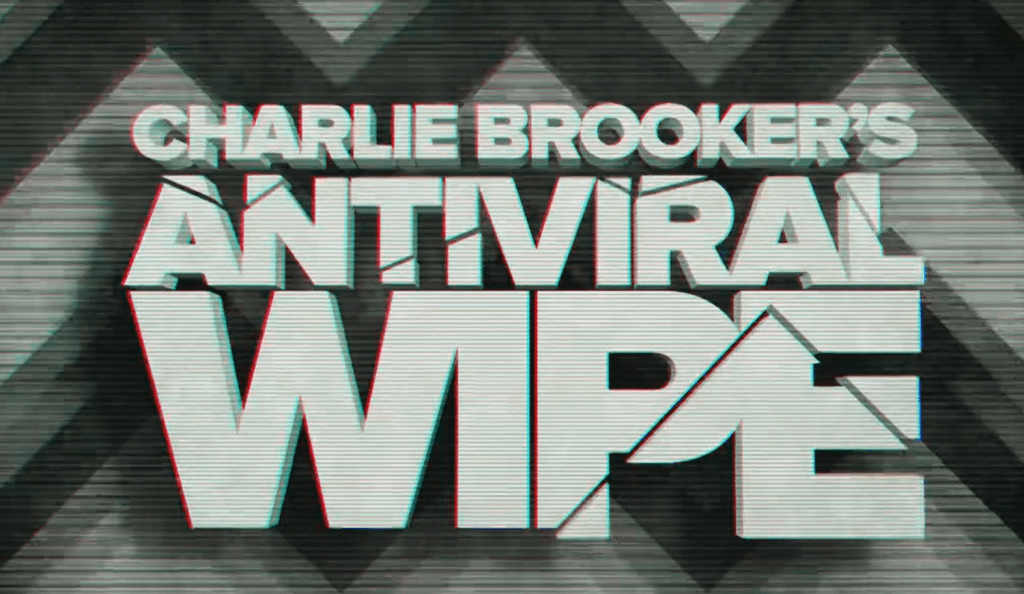 As we huddle into our respective homes and try and pretend the bad thing isn’t going on outside, we look to the electric panel featured in our living room for distraction after distraction. Netflix won’t do, if you’ve been keeping up to speed with my other writings, you’ll know that Netflix has gone into the production of shlock in the hopes that gutless, mindless and predictable films will keep us all entertained. It’s not much better on Amazon Prime, the last time I dusted the cobwebs off of that, My Spy was slapped on the front page, proudly proclaiming it was an “Amazon Original”, even though you know and I know that that’s just not true. So, it’s up to the delightful mind of Charlie Brooker to keep us from counting the kitchen tiles or conversing with our “family”. Charlie Brooker’s Antiviral Wipe is unexpected, but wholly welcoming in these unpredictable nightmarish times.

Brooker has always been able to make light of dark times. He has a knack for it that doesn’t quite transfer to Black Mirror, but his “non-fiction” satirical takedowns of mainstream popular figures and the public mood have always been rather mesmerising in their own right. He hasn’t missed a beat and, with four years since the last Wipe oriented televisual display, it’s nice to see that Brooker can shift himself into writing gaudy jabs at public figures with relative ease.

Keeping it more based on issues at home rather than around the world, leading us through the British coronavirus response and lockdown. He takes us by the hand, documenting how rapidly the virus spread and how ignorant we were of its initial extent, and then hammers the message home by veering us cliffside to showcase just how maddening it has all become. Strapped for time and resources, it’s certainly admirable how well the show comes together. The shoestring budget feels more like a staple than a crutch, self-deprecation a major player in the normal format, the added layer of self-made props and sets adds a nice homely feel to it.

Brooker is happy to take more than the occasional jab at himself and those around him, including his own family and returning favourites Philomena Cunk and Barry Shitpeas. They each have spectacular moments, reeling off of the temporary cancellation of Cunk on Everything, bringing their A-game to some delightful material as I expected they would. It all feels relatively vague at times though, definitely down to the amount of material and the lack of time. Perhaps it’d be more valuable to place these into a series rather than a one-off special, there’s certainly enough room on the TV schedule for it between the re-runs of Celebrity Masterchef and the news.

A return to form is always nice to see, but when it comes at a time of national crisis, it feels like an apt reminder that there are still things to laugh at. Brooker and company keep an affable, clumsy show trundling away, mocking the virus with offhand remarks that’d make you think Brooker has laughed in the face of global catastrophe before. It’s a superb time, full of jokes that are on par with the best bits of his previous work. A nice little distraction, and that’s what we all need right now.