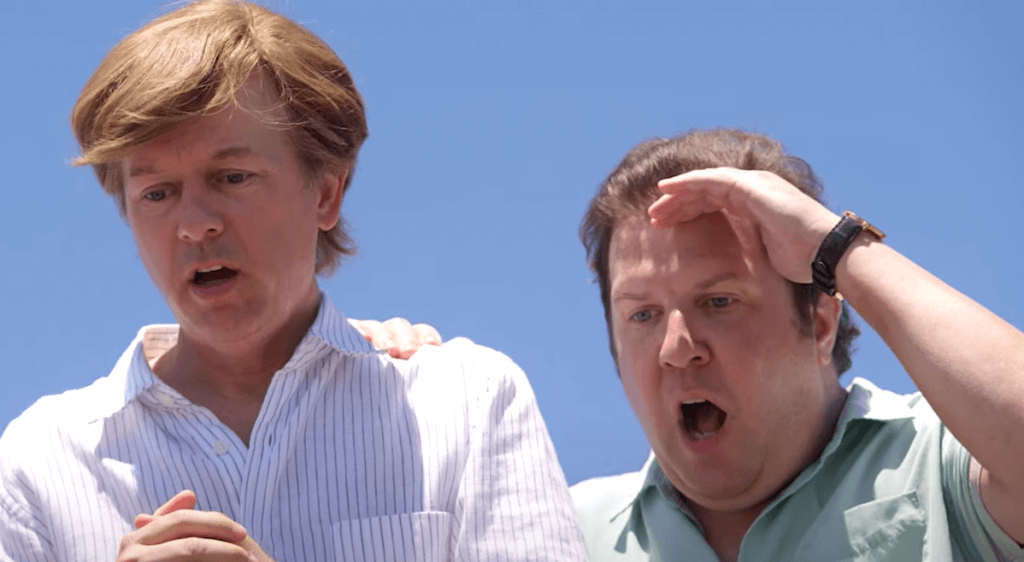 The frequent collaborations between Netflix and Adam Sandler’s production company Happy Maddison Studios is perhaps one of the many banes of my existence. Previous years have been seeped with truly miserable experiences, one after another in a cycle of truly disappointing, unfunny films, a vacuous void of Sandler and his chums palling around for ninety minutes at a time. None of them have been anything above miserable, but The Wrong Missy, for all its shortcomings and various, bleak moments, gets far closer to hitting the comedy highs than any of the other Happy Maddison productions have so far.

By no means is that a compliment though, The Wrong Missy is at best a predictable farce that has nothing of inherent value tucked away behind its meandering characters or useless story. Following businessman Tim Morris reeling from a terrible first date, a chance encounter at an airport sets him away on a path of romance. Making the big leap to invite Missy to a weekend tropical getaway, he soon finds that he has invited the wrong Missy. As if the title didn’t give that away. Directed by Tyler Spindel who also graced us with the David Spade led Father of the Year, a film so bad that it made Nat Faxon look like a tremendous actor, you can hopefully see that quality isn’t what you’ll receive from this film.

A script mired by jokes that would’ve felt out of place or dated in the early days of Billy Maddison and Coneheads, most of the issues within The Wrong Missy come from some generally poor set pieces. Nothing sticks out as notable or memorable, swinging and missing more times than it can fumble its way through one of the rare few enjoyable pieces. Perhaps it’s because the humour of writer Kevin Barnett hasn’t improved from his Hall Pass days. There are glimmers of hope, but for every somewhat engaging or enjoyable joke, five more useless ones crop up in a matter of moments. It’s certainly a film that will appeal to those that engage with the humour and style of Spade and Sandler comedies, and those are the people I truly worry for.

It’s a lot less contemptible than I had first expected The Wrong Missy to be, though. David Spade isn’t quite as revolting as he is in other projects, he does have some form of respect for what a starring role should encompass. Lauren Lapkus stars alongside Spade as the titular Missy, and to be frank they have a rather nice deal of chemistry. More than enough to carry the film limping toward the finish line, Lapkus and Spade share a solid few moments. It never reaches a height higher than instantaneously forgettable, but the chemistry between the two of them is undeniable, if a bit predictable.

The Wrong Missy certainly could have been a lot worse than it is, it’s one of the few comedies available currently that does have within it the energy and confidence to muster up a couple of laughs from time to time. Pooling a rather impressive cast of C-list comedians and you have a competent cast toiling away through a script overwhelmed by viciously unfunny moments. Transcending the level of watchable is a harder accomplishment than most would expect, and The Wrong Missy only just reaches a state of completely acceptable and borderline tolerable humour.