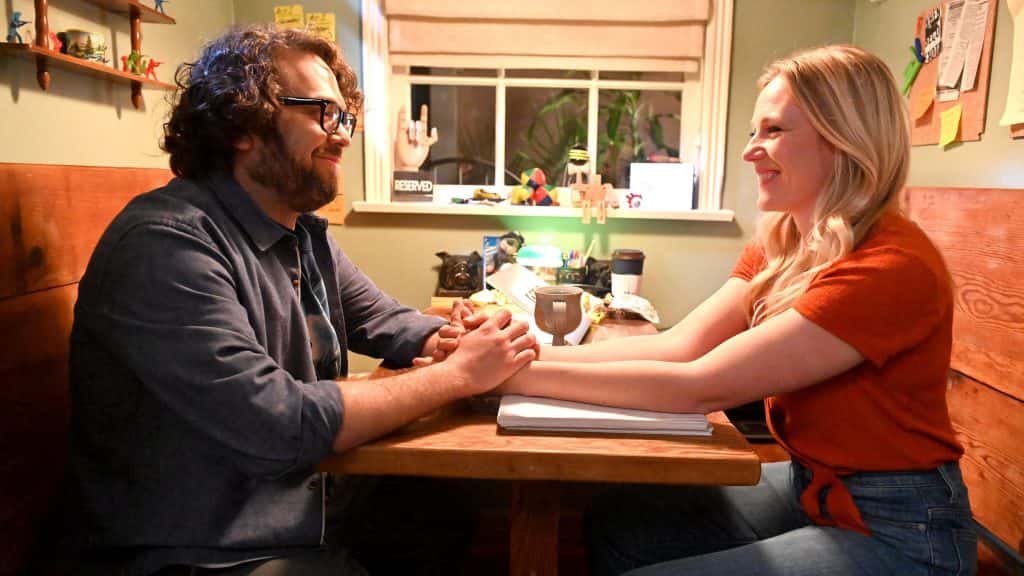 Arguments. We’ve all had them, probably. Without wasting any time at all, The Argument does exactly what it says on the tin. Nothing but arguments for a long, long, eighty minutes. From Dreamland director Robert Schwartzman, his look into the culture of arguments and their knock-on effects provide little insight and lots in the way of excessive, empty remarks on society, prejudice, and all the old bells and whistles you’ve come to expect from smaller projects that just so happen to rope in big names like Maggie Q and recognisable faces like Danny Pudi and Dan Fogler. Still, if the poorly calculated risks The Argument takes in its expected twists and turns aren’t enough to tide over its audience, then nothing else will work for this sloppy, performance-based hell.

The film feels very similar to Roman Polanski’s Carnage, a film taking place in one room as the couple begin to devolve into touchy subjects and argumentative battle over an issue that seemingly resolves itself outside of their reach. It slides down in quality, going from Carnage to The Party levels of short entertainment based on the vices a group of friends hides from one another. We slide further down, snowballing into a congealed, mediocre piece that has prophetic talks about absolutely nothing at all. We dive into a fumbled piece, stereotypical characters with one personality trait each. The awkward host, the stuck-up businesswoman, the jealous husband, it’s all there and all of it feels so underwhelming.

Every character leaps around with such weird melodrama. Their one personality trait manages to clash and grate with just about everyone they share the room with. Shoddy dialogue plagues the film, we’re meant to be invested in these characters, but they’re as useless and cliché as you’d expect from a director who has spent his entire career treading water. Nothing to say, nor does he give his cast anything to do. Little extra bits and pieces that the characters throw in to try and spice up their performance in fact become problematic annoyances. The inability to let the dialogue do the talking, the acting is actively trying to provoke detail in its characters, but they do little more than annoy.

With The Argument wearing the drama on its sleeve, there’s no room for interest or growth. In a film like this, everything comes down to performance, and Schwartzman’s direction just doesn’t have the muscle needed for six interesting characters to come together and fight one another with wordplay and wisdom. Zac Stanford’s script could use some real work, the creative industry members his cast play highlight yet another “struggling artist couple” with bits of themselves falling away like a wet cake. Nothing offered up is of interest, and the few shining moments have been done before, mused on better in the likes of My Dinner with Andre or The Sacrifice. Schwartzman’s work can only dream of being a crumb as interesting as those well-written, thought-provoking pieces.