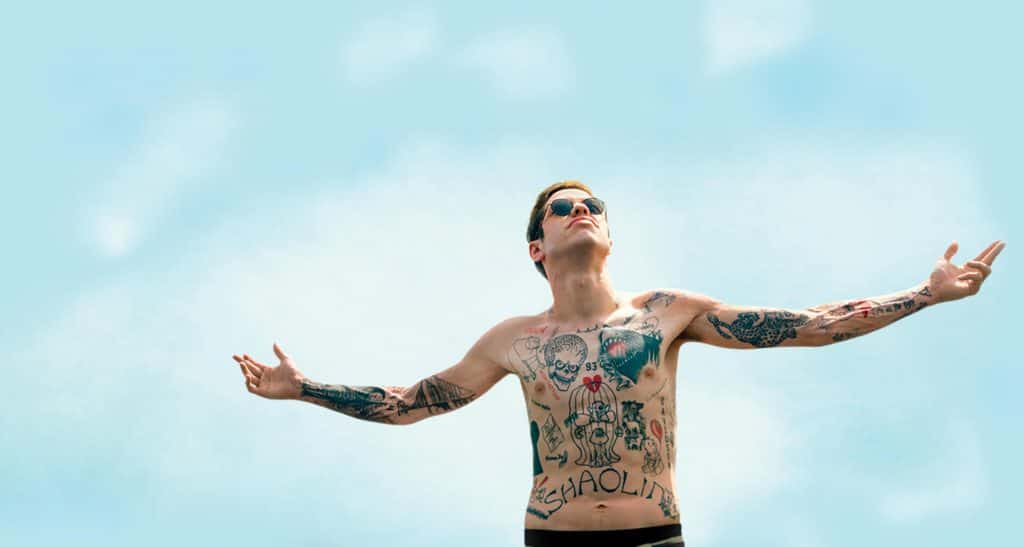 American comedies aren’t, for the most part, something I enjoy all that much. I’ve seen more than a handful of Judd Apatow’s directed works and the majority of them are just okay. They always suffer from being achingly long, and most of his work can fit within the ninety-minute confines of most other comedy movies. His two-hour behemoths are often off-putting, so it was no surprise that I was a little hesitant about entering into The King of Staten Island, the latest Apatow comedy that pairs Pete Davidson and Bill Burr together on the big screen. What’s even more surprising, then, is that The King of Staten Island is rather good.

Following the grief-stricken Scott (Davidson), a drug-addled, foul-mouthed, mid-20s guy with no direction in life apart from an aspiration to become a tattoo artist, The King of Staten Island blends Apatow’s need for emotionally touching comedies with light drama mixed in throughout. This is perhaps the most convincing his work has ever been, surpassing earlier comedy, mid-life crises films This is 40 or pregnancy scare drama like Knocked Up. Apatow’s pairing with Davidson provides some of the strongest material for the two of them, with a leading performance from Davidson providing much of the laughs throughout. He’s quite comfortable in this leading role, and quite likeable too, something I never thought I’d be saying about a modern SNL alumnus.

There are some genuinely great lines throughout The King of Staten Island. Most of it works rather well and it is an honestly strong comedy. Burr and Davidson have some incredible back and forth with one another. The camaraderie that the film displays is warm, a nice inclusion to create a narrative well worth investing in. Burr, in particular, is a real treat, his comedic talents aren’t wasted as he blends them seamlessly with a role that spars with Davidson rather frequently. Throwing in Marisa Tomei and Steve Buscemi in some somewhat important roles is a great way of building a foundation for the comedy to bounce around.

It’s a tad on the nose at times though, and there are a few jokes that will kill the pacing stone dead. To go into The King of Staten Island expecting these predictable moments is a wise choice, as expecting them softens the blow of their inevitable arrival. Not as frequent as I would’ve first expected, but there are certainly more than enough of these moments to raise an eyebrow. Falling into the style of Funny People, with a relatively serious plot at the core, with comedy built around it, it’s nice to see that Apatow does have it in him to make a relatively engaging film with believable, fleshed-out characters.

Pleasantly surprising, and genuinely enjoyable, The King of Staten Island had me worried, but it’s a tremendous, hilarious time. Apatow’s maturity on a whole slew of subjects is impressive, and Davidson’s leading performance holds it all together with a confidence I hadn’t expected. The pacing is predictable and a little strung out, but it’s certainly a likeable piece. There are worse ways to spend two hours, with The King of Staten Island not exactly becoming the king of its respected genre, but more than competent with the somewhat true story it looks to deliver us.