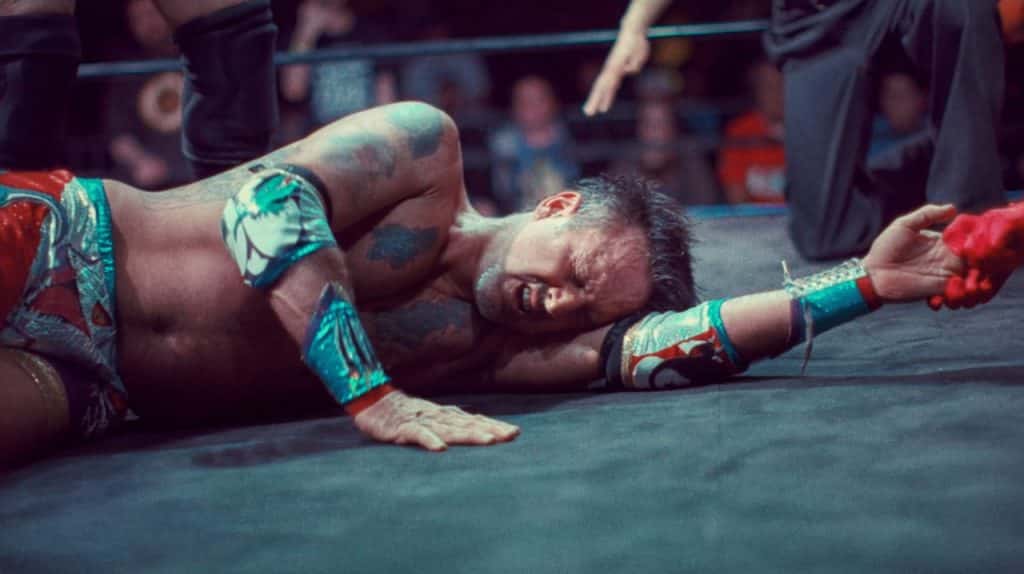 You may not be able to kill David Arquette, but you can certainly crush his spirit. After some promotion-gone-wrong for his Ready to Rumble film in 2000, Arquette found himself holding the title belt for World Championship Wrestling. It was a move he disagreed with entirely, at that point the tide turned away his two biggest draws. Wrestling fans hated him for being too Hollywood, Hollywood hated him for being too in with the wrestling crowd. He was stuck between a rock and a hard place. For the past twenty years, though, it seems his growing resentment for this decision and his future has plateaued into a more manageable goal, to make amends. You Cannot Kill David Arquette documents his experiences of becoming a professional wrestler in an extreme, dangerous attempt to right the wrongs of the past.

Like it or not, Arquette is a solid actor. He skyrocketed to fame, but fell short thanks to his most memorable moments in Scream. We get a great glimpse into how that star faded out so rapidly, and the frustrations that surround it. Ten years of not quite getting his foot back into the door of the mainstream has certainly taken its toll on not just David, but his family, ex-wife, and friends. Directors David Darg and Price James have no issue pulling the curtain back, tearing it from the rail and reflecting on the fact that Arquette’s brief, initial stint in the industry is still a horrific open wound for both fans and performers.

Reflecting on the problems of the past, Arquette meets up with those who shoehorned him into an impossibly difficult place. Interviews with some of the all-time greats of the wrestling business, the likes of Ric Flair, Eric Bischoff, and Kevin Nash give insight into what they really thought of the build-up and fallout of this infamous moment, along with how they feel about Arquette’s current situation. Most fans that are interviewed have a burning hatred held within them for Arquette, and it’s surprising considering the clear knowledge and passion he has for the industry. Old wounds never heal, clearly, as he finds himself wrestling Mexican street shows and backyard spots with tens of fans watching on, taking lighting rods to the back and busting his head open. It’s terrifying, especially considering the medical issues outlined earlier in the film, and at some point, the line between beating up a man in need of help, and helping out a man driven by passion, is blurred into one.

It’s scary to see how far Arquette has fallen. The bumbling but loveable show-stealer of the Scream series never found his footing after the destruction of his career. There are some real eye-opening moments, one scene where Arquette has doctors injecting ketamine into him, a bizarre scene that taps into his psychological and mental state. You Cannot Kill David Arquette is more than just a look at the life of a man wanting to make amends with the wrestling community, but it’s a catch-up with a man who once dominated the screen. His life is packed away in garages, storage lockers, and boxes. He seems completely disconnected from reality, riding atop a horse named Scooter, wearing a Ric Flair-style robe, his beer belly hanging out.

My only criticism of this piece is that I wished the documentary crew had been far more involved than they had been. They’re interacting with Arquette on a personal level, they play around with his puppets in an abandoned circus briefly, but they never pry or weasel their way into more personal questions. They’re very small flies on the wall, never daring to question Arquette’s motive for getting back into a business that has no need or desire for him. His battle with addiction and his need to return to wrestling to focus his mind is phenomenally well-detailed, and audiences will have no trouble engaging with this story.

Backstage booking decisions are often the reason for moments like this, but the hatred held for Arquette and the impact it had on the company is incredible. It’s documented well in You Cannot Kill David Arquette, where Arquette’s love for wrestling overtakes any sensible response to a lack of respect. The sensitivities and desire to be liked and respected by those he wronged in the past is admirable, and it’s the driving force behind the documentary. All of Arquette’s anxious feelings and his remorse over how wrong it all went is showcased phenomenally well here, and considering how much he applies himself to his new, dangerous career, you can’t help but hope nobody really can kill David Arquette.