Movie Review: Another Round 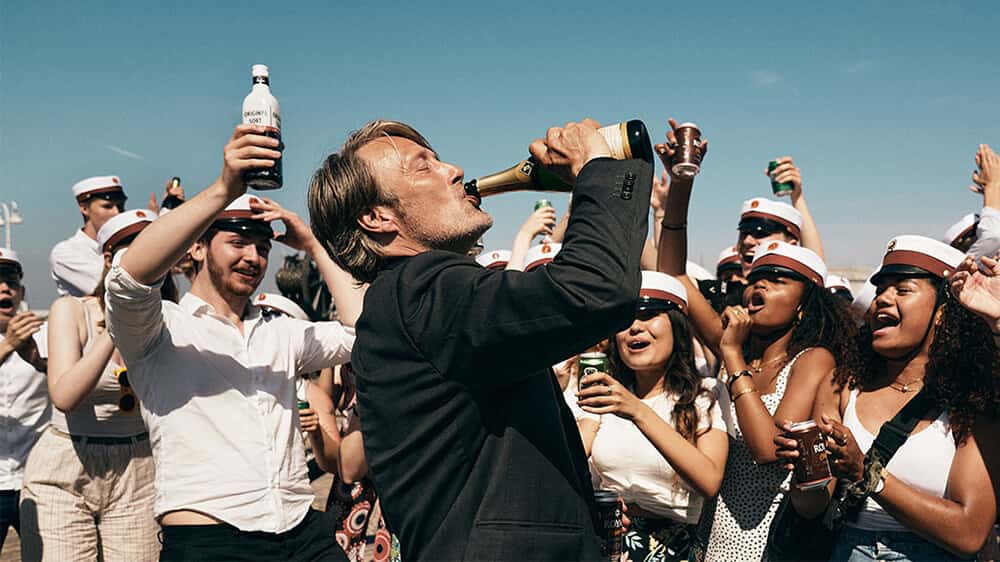 Drinking has attached itself to so many important moments in societies across the world. Whether that’s a detriment or a dream come true is up to the individual. A social welder, a coping mechanism, a celebratory beverage, or a steriliser, maybe all of the above at once. Another Round, the latest film from Dutch director Thomas Vinterberg, follows four high-school teachers who open a study into how a low level of intoxication will affect their day to day business.

A film that has Mads Mikkelsen in any capacity is already off to a strong start. His previous collaboration with Vinterberg, The Hunt, was a painfully harrowing, incredibly interesting watch. The pain is lessened somewhat in Another Round, it masquerades itself as four guys having a good time, pushing one another to an imaginary limit for the sake of scientific thesis. Mikkelsen is the clear stand-out here, his role as Martin feels bolstered by those around him. Thomas Bo Larsen’s role as Tommy feels like a great counterpart to such a performance. The other half of this group of friends, Nikolaj (Mangus Millang) and Peter (Lars Ranthe), make for exceptional roles also. The four together are unstoppable, a natural charm to them all and a real dedication the source material that sees these four friends devolve and dissect their actions and inactions.

Moments throughout are rather poignant and cut through the material with a superb efficiency, whilst other pieces feel rather on the nose, and other moments simply shy away from what Vinterberg wants us to think about. Still, those blunders are few and far between, the majority of the film is a sensitive look at how alcohol impacts those who feel they can handle more than the average pint.

Their experiment with how alcohol affects performance inevitably slips over into the lives of their loved ones and those they lecture. Their responsibilities begin falling to the wayside as they learn to embrace life, but neglect their leadership roles. If alcohol is needed for someone to grasp the nettle, then perhaps the sober and drunken minds are two completely different objects. Another Round considers this from time to time, it showcases the safety and the dangers of the inevitable spiral with surprising balance. That spiral comes far later than I had expected, but Vinterberg’s talents at creating natural, character-led story comes into play with an impressive explosion of dramatic prose and inevitable outbursts. The consequences of our actions, no matter how docile or good-willed and entertaining they may be, impact those around us both in the short and long term.

Vinterberg’s story of four friends experimenting with wines, spirits and drafts is more than just a tour of mid-life crises, it’s a film that criticises the culture of drinking, the issues it can cause between loved ones, and how toxic it can be if mismanaged. That inability to call it quits. To have, as the title suggests, another round, is far too appealing for many, myself included. The film tackles the emotional toll, dancing around the taboo subjects of alcoholism and extra-marital affairs. To be fired up yet laid back at the same time, that is what the film wishes to discuss the impact of, and how such a feeling can lead to revelations good and bad.

Another Round dares to consider the link between the creative mind and the stimulants that kindle them. It’s something I believe in, that correlation between substance and the imaginative, innovative mind, and it seems Vinterberg does too. His work here has crafted a tremendous opening for discussion in how we view the great leaders of history and their link with liquor. The film manages to muse on the highs and lows far better than I had expected it to. Is alcohol the key to unlocking the artistic mind, or is it a slippery slope that laid to rest the many great workhorses of our time? Hemingway, Hunter Thompson, Allen Poe. Was their work bettered by the refreshers they revelled in? Another Round presents both sides of the coin, and leaves it up to the audience to decide which side they take.