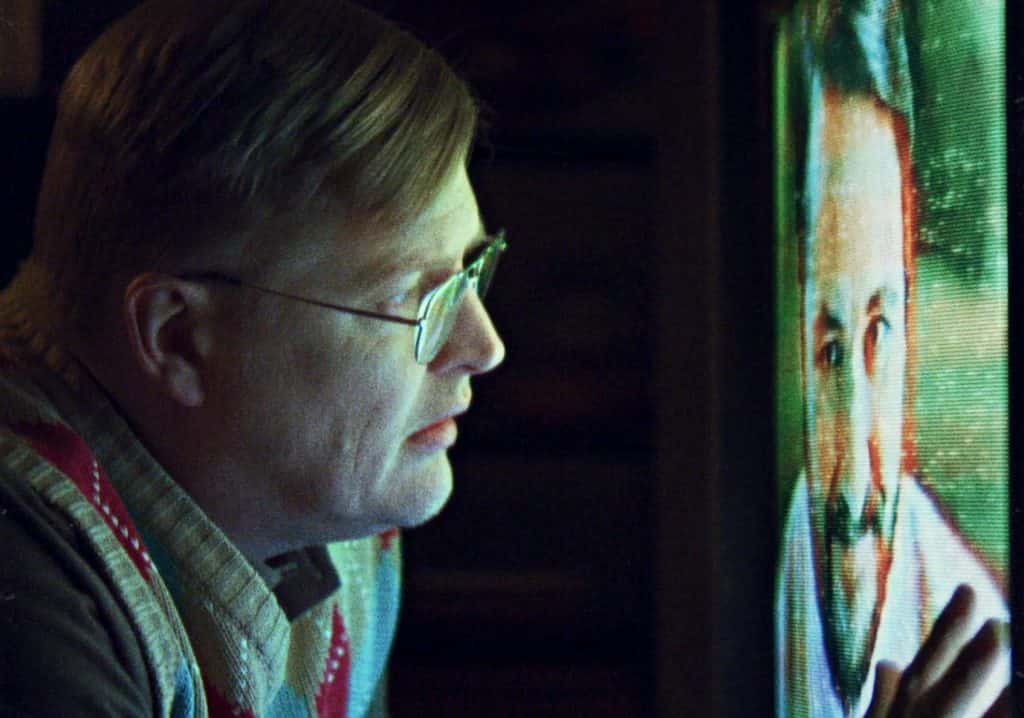 If the morbidly strange world of television weren’t eerie enough, Rent-a-Pal, the debut feature from director Jon Stevenson, looks to focus in on the weirder world within the electric boxes mounted to the walls of our living rooms. Tapping into the wholesome, calming mannerisms of Bob Ross and Mr. Fred Rogers, Stevenson brings us an ominous tale of brainwashing, and how the small-screen can impact the fractured minds that glue themselves to the joys of VHS tapes. His spin on the comfortable friends found within 90s television turn into a horrifying cycle of dependence, reliance, and obsession.

Choosing Star Trek alumni Wil Wheaton seems to have paid dividends here. A recognisable face, twisting and contorting on the stuttering, crackling screen as he descends into the mind of our leading man, David (Brian Landis Folkins). Smart editing makes the seemingly touching and engaging feel creepy, a lurking madman poised inside the television screen. There’s no pacing to these moments, the villainous moments come instantaneously, and it doesn’t feel like there’s a build-up of trust between man and tape. It feels rather underwhelming to use a montage to showcase this haunted videotape, and the illusions of one man isolated with his mother. Folkins’ performance is a great one, he comes across as a man on the slippery slope of insanity, an immediate outcast judging him by appearance alone, something the film is banking on.

The performances that surround Folkins, especially his mother, Lucille (Kathleen Brady), are touching. There’s an emotional core at the heart of this film, but it’s masqueraded by a horribly twisted protagonist. With the premise taking itself a tad too seriously, I was hoping some sort of whimsical, dark humour would ooze out, but Rent-a-Pal doubles down on the acerbic tensions of the dynamic between Folkins and Wheaton. It’s easy to write the film off as a message on the distraction television makes, and how it creates a wall between introverts and the real world. I’m not saying Rent-a-Pal is more than that, but it certainly shouldn’t be written off by its rather weak, underlying subtext.

Capturing the 90s aesthetic well, with a sedated camera and all the tropes you could expect of this environment, Rent-a-Pal captures its sinister, unnatural feelings well. It feels very similar to all the other jaded, strangely led pieces of the thriller genre, but Rent-a-Pal hits all the right buttons for me. A real slow burner, but it revels in the eccentricity of a loser in the landscape of dating. It saps the heart and life out of it, pumping horror, dark tones of eccentricity, and real ingenuity into it. A superb first outing for Stevenson, as he parades his unique brand of horror in front of an audience that will hopefully be hungry for more. Uncomfortable viewing, and without question one of the better horror films to release in the past few years.