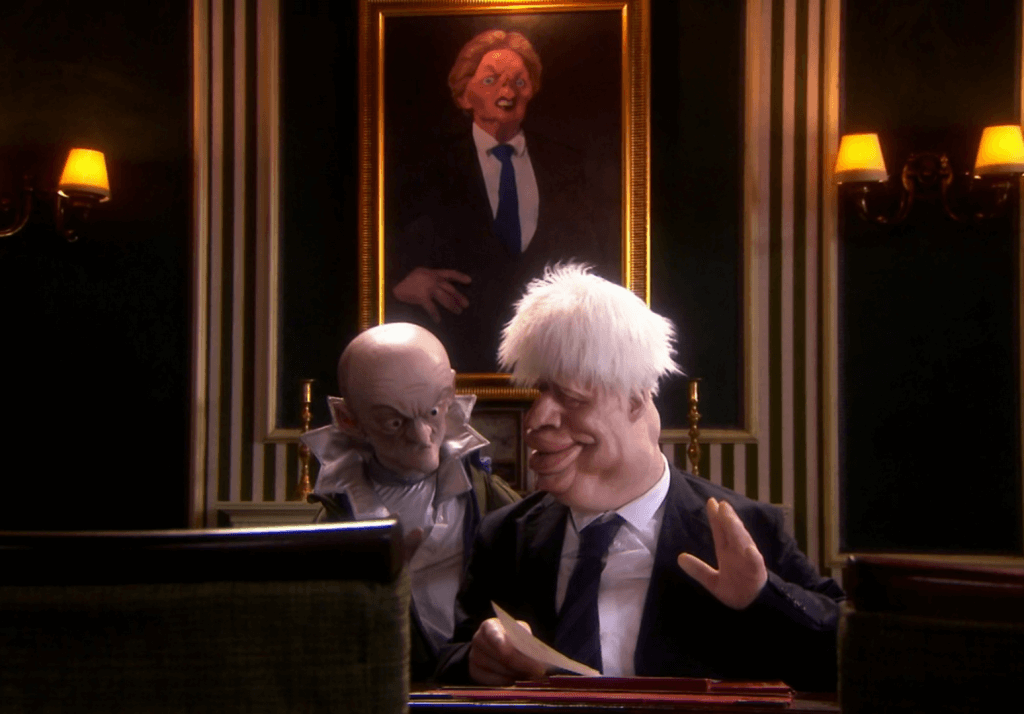 As our political leanings grow ever stronger, and those on the world stage become inevitably more embarrassing, we turn to satire and comedy to pull us out of this pit of despair, and throw us back into a world of sunshine and rainbows.

Satire, as of late, has lacked a punch.

It feels rather weak when compared to the glory days, and it feels like the idea of rebooting the classic hilarity of Spitting Image came from that satire-shaped hole. Exclusive to Britbox (so only about five people will see it, including myself), this first episode gives us a sign of things to come. What a horrible sign for the future of comedy.

There are a few moments that stand out, though, especially when compared to the original show. Puppets that still hold their charm, but have the added bonus of CGI.

A puppet of Dominic Cummings pulsating looks tremendous, but a green screen of Trump shrinking down to negotiate with the coronavirus looks truly awful. Cummings is the highlight of the show; his voice, demeanour, and being from a completely different planet, he refers to students as “larva”, does what’s good for the “hivemind”, and, for whatever reason, is dressed as a wizard.

It works, though, and the more left-field Spitting Image goes, the better it gets. Costumes, set design, and iconography is so crucial in this form of comedy, so it’s comforting to see the building blocks are there to play around with.

Dominic Cummings begging Boris Johnson to eat a baby, Trump drinking gravy from a bucket, and Prince Harry popping down to the jobcentre, these moments are great, but they’re weighed down by a barrage of jokes that just don’t work.

The beauty of the original series was that the jokes weren’t on the nose. You could pull the message out of the sketch itself, but here the sketch explains the meaning behind all the cutthroat lines as we go, breaking the pacing so it can cater to the most passive of viewers. There are other jokes that blatantly rip-off the jokes of the original, a grey Mike Pence replaces a stone-coloured John Major.

A few jokes rely on old tabloid stories, too, and I don’t think those who are out of the loop on Sun headlines will find much joy in those.

A few jokes that are cripplingly underwhelming, nice nods to the original series, and some great puppets, it’s a shaky start to the series for sure. Pockets of joy to be found throughout, but they’re few and far between. Spitting Image doesn’t manage to hit the ground running, with more than a few teething problems in this debut presentation.

I’d be extremely surprised if this reimagining survives until the next election, but we may as well try and enjoy it whilst it lasts.