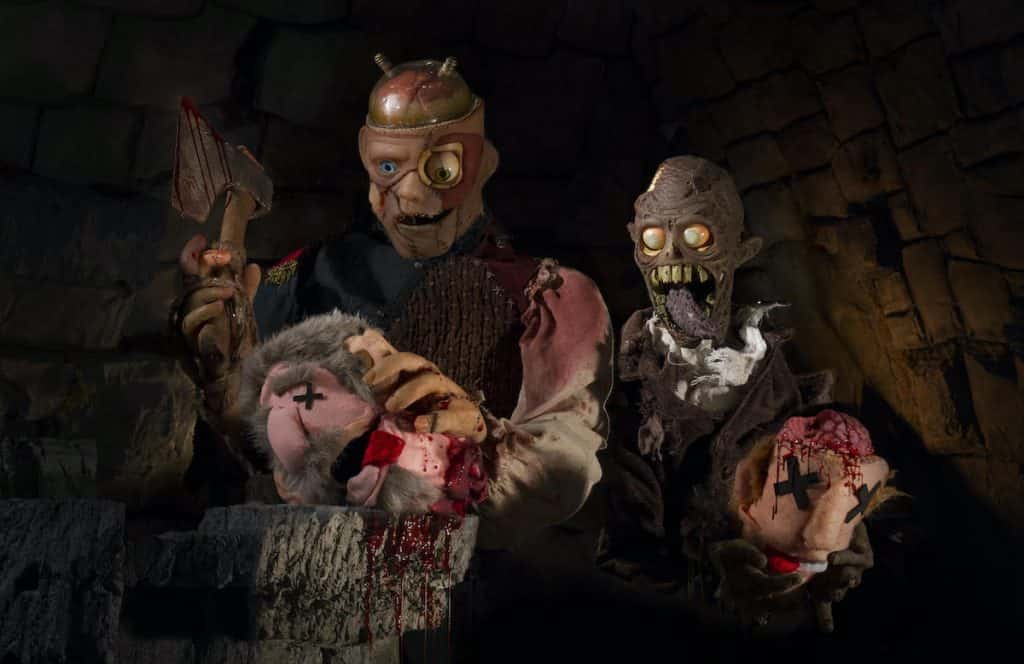 There’s something rather scary about felt. I remember as a kid I was terrified of the Dolmio adverts, something about puppets consuming human food knocked me a bit sick, and it still does a bit. Frank & Zed, then, a shoestring budgeted puppet horror show, taps into my hidden fear of being hacked to death by Beaker from The Muppets. Still, we’re about due a shake-up of the horror genre, it was all beginning to get rather stale. There’s only so many times you can watch Freddy Krueger whip out some sunglasses and rattle through a series of pop culture references before you start to get a tad bored.

Fantastic puppetry is to be expected, and that’s just what Frank & Zed has to offer. Well-crafted puppets that blend horror with comedy, an expected mixture that works superbly well. It shouldn’t be too surprising that such a mixture works, puppetry has been around for a long while, and this is just a grander, gorier invention. Gorier moments appear throughout, though far less frequent than I’d have hoped for. It’s a certainly unique comedy, it just doesn’t work due to some awful pacing issues. Chop a half-hour out of this one and you’d notice the difference.

Gory glory and presentable puppetry only take us so far, though, and Frank & Zed falls to pieces faster than its monsters do when it comes to articulating its plot. Although an astoundingly unique visual, the plot is just what you’d expect a riff on the Frankenstein tale to be. It’s predictable, doesn’t set out to do anything different, and ultimately wears down the film to a point of absolute meandering nothingness. A film like this is only as good as its story, so to see a predictable, and at times boring story come from this, it feels like such a let-down. I’m thoroughly impressed by the puppetry, but the novelty wears rather thin almost immediately, replaced by a story that bored me to tears.

Frank & Zed have forced me to cancel all of my future Dolmio days with their gory rendition of what puppets can do to one another when armed with axes and fuelled by anger. The gore isn’t as frequent as I thought it’d be, but neither are the enjoyable moments. Few and far between at the best of times, the film struggles through on a plot that’s so bland and meandering that it can barely fill its running time. A great deal of filler to be found inside of this one, and not much of it is worth the payoff at the end. It’s a shame, such ingenuity should be praised, but it’s hard to applaud a film that has tremendous originality, and nothing to do with it.