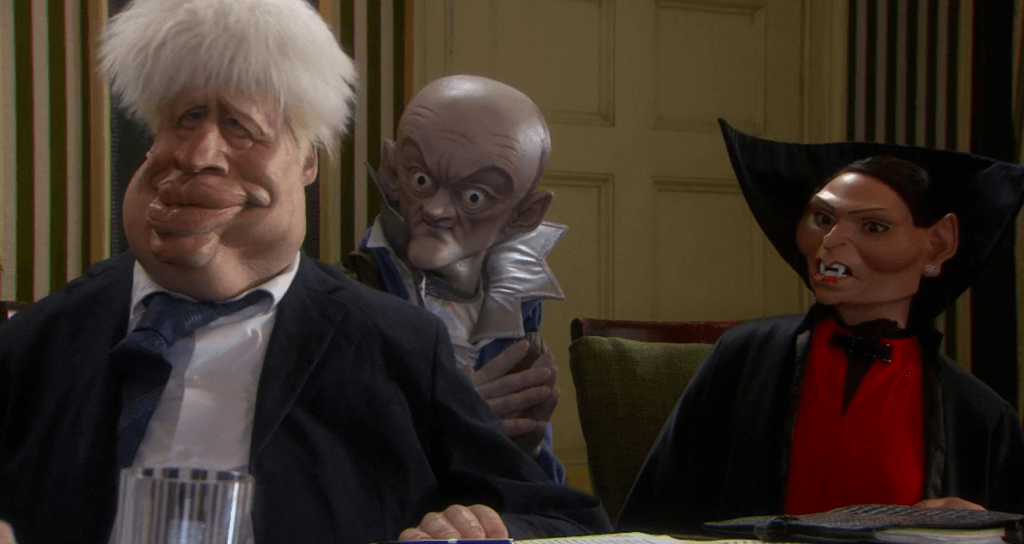 As we trundle forth into the third episode of Spitting Image, it should be worth noting that the best of sketches have a cutting edge to them, something that can tap into the mindset of a group whose voice is prominent in politics. Why we open with a joke about Cats, the awful adaptation of the horrendous stage play of the same name, is beyond me. I suppose it’s a sign of things to come, and as we peek into the underwhelming series’ third instalment, it should be no surprise that we’re already past the peak of quality. Already, the series has ran out of steam.

Matt Forde’s impression of Donald Trump has gotten rather underwhelming. It’s impossible to write good satire about Trump, his demeanour, use of the English language, and media presence have all amalgamated into a satire-proof shield. The offerings here for American political satire is weak at best, with Trump’s phone sending him an electric shock every time he tweets out fake news. The lengthier sketches are awful, Harry and Meghan moving to a new cul-de-sac with Lebron James offers up nothing of interest. Weak jokes stifle any progress this episode could make, but there’s the odd line or two where the payoff feels somewhere close to being worth it.

On the British side of political satire, things are looking no better. Early scenes that have already devolved into having characters dressed in their ill-established caricatures. Dominic Raab in his karate outfit, Priti Patel as a vampire, these jokes were poorly established in the inaugural episode, and it feels like a bold move to run with them so early into the series’ lifespan. Now that we’ve suffered through Trump negotiating with the coronavirus, we now have Boris Johnson wooing the virus. The strength here comes with the Keir Starmer piece, looking after a children’s shadow cabinet, an all too brief outing for a promising puppet. Dominic Cummings’ alien trip to Durham is exceptional, bringing the North their favourite snacks of black pudding and knock-off cigarettes.

Two weeks after the sacking of Gunnersaurus, Arsenal’s mascot, Spitting Image finally knocks out a twenty-second skit. What the original series had that this interpretation is lacking, is timing. As much as it is unfair to compare the original Spitting Image with its modernised version, there’s no hiding away from the fact that this Britbox series isn’t on the ball. There’s a strange obsession with beheading the puppets in this one, and I’m not sure why it comes up so frequently. It feels like the writers are stuck for material already, a real shame indeed.