How do you follow up an unconventional film, that became a worldwide smash hit? If  you are Warner Bros, you make a spin-off focusing purely on one of the characters from the original. Also, it helps when that character is The Dark Knight himself, Batman, who is arguably the most famous comic book character ever. But the main question is whether it works or not.

2014 release The Lego Movie was, and is, great fun. A family movie which really does have something for everyone. It has charm, characters to care about, a fun plot and in the end, a relevant message. Clearly, the public agreed as the movie made more than $469 million at the international box office. With a sequel coming in 2019, a spin-off featuring the stand out character, Batman, is here now.

The Lego Batman Movie focuses on The Dark Knight once again saving Gotham City from nearly every Batman villain you have ever heard of and a few you probably have not heard of, including characters such as Gentleman Ghost and The Condiment King. Throughout the film, he realises that there are some personal lessons he needs to learn about himself and the people around him. 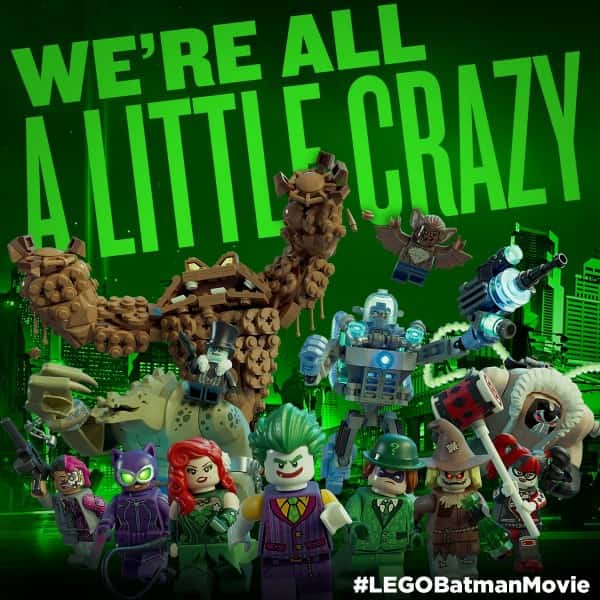 The film is consistently funny. There is plenty of enjoyment to be had here for children, but also a lot of jokes aimed squarely at more mature members of the audience. For example, a cinema in the background of one scene is showing Two Shades Of Grey. A family movie that can appeal to all ages is a rare beast. Often, the content will aim to purely please the younger viewers. With The Lego Batman Movie, this is not the case at all.

One embarrassment for Warner Bros is the fact that this Batman film is far better and likely to be better received than the big budget disaster Batman Vs. Superman, a film that Lego Batman references in a nod to Batman’s past. They even mention the Adam West Batman of the 1960s, complete with one scene where BAM and POW appear when punches hit faces. This is a movie that is very proud of Batman’s past but is aware that there is plenty to mock throughout his history.

For a film to be so modern and fresh, yet still be a clear love letter to the characters past, is a wonderful thing indeed. Despite not having the same high level of charm as The Lego Movie, Lego Batman is still a wonderful experience. It is a frequently, exciting and surprising film. To quote the theme song for The Lego Movie, with The Lego Batman Movie, pretty much Everything Is Awesome.