Mythology has long been a key ingredient in the Neil Gaiman canon, from Anansi Boys to the sprawling American Gods, Gaiman has regularly drawn inspiration from the tales of the various Gods that inhabit our folklore.

As the jacket of his latest effort, the beautifully-presented Norse Mythology, tells us: the Norse myths are woven into the fabric of our storytelling. As a result of the gigantic success of the Marvel superhero films, as well as History Channel’s excellent series Vikings, there is now renewed interest in the ‘pagan’ gods of pre-Christianization Scandinavia.

This retelling of the Norse myths is a natural fit for Gaiman, who excelled in his subtle description of a modern-day Odin in the aforementioned American Gods. He handles this exercise with less panache, favouring more of an around-the-campfire approach to his storytelling.

Still, he injects the Gods with plenty of personality: the fierce but dim-witted Thor, the mischievous and malevolent Loki and the beautiful but prideful Freya. Gaiman takes us on an exploration of his favourite Norse myths, from serious matter like the creation and eventual destruction of the world to more light-hearted affairs such as Freya’s botched wedding to Thrym, Lord of the Ogres. 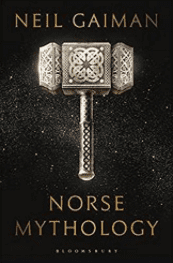 The author has stated in interviews that he didn’t intentionally arrange the myths into a cohesive order but the tales of the Gods slide effortlessly from one to another, with the latter chapters clearly laying the groundwork for Ragnarok, the final conflict between good and evil which consumes the whole world.

The material isn’t original by any stretch of the imagination, but Gaiman finds a way to make it feel fresh. His Gods aren’t perfect, ethereal beings who never put a foot wrong, but rather exaggerated versions of humans themselves. We all know someone who has a bit of Loki in him, while we’ve definitely come across our fair share of Thor’s.

Norse Mythology makes it difficult to think of these beings as the ones that people were so dedicated to centuries ago. Valhalla, Odin’s Hall where warriors who fall in battle fight and feast to their heart’s content, is a very medieval proposition. It’s hard to imagine a soldier dying in Iraq or Afghanistan heading not to Heaven but to Valhalla and the company of Odin.

Gaiman’s aim isn’t to indoctrinate, however, but to entertain, and he achieves that goal with ease. His story selection is flawless, providing tales that while feeling episodic also link together easily. We learn about Loki’s children with the giantess Angrboda, how Thor came by his famous hammer Mjollnir, and why Frey gave away his sword Laevateinn – all of which are vital at the conclusion of the book.

Some may find Gaiman’s work here too prosaic after his nimbleness on similar subjects in the past, but Norse Mythology more than achieves its humble aim of providing an entertaining retelling of the Norse Myths for a modern audience, and for that the author should be congratulated.