With the release of their third album, Good Nature on August 25, Turnover announced back in June that they would be returning to the UK as part of their world tour. It would be hard to imagine that any of the other venue of their eight date UK leg could be bouncing as much as Newcastle’s Riverside was last night.

With support from bands Emotional and Paladino, it seemed that everybody was still in the pub while they were on because as soon as they finished, everybody piled in awaiting the arrival of Austin, Danny and Casey.

However, they seemed to of had a large impact on the audience when a large mirror disco ball was switched on and made the room feel like a 90s disco. 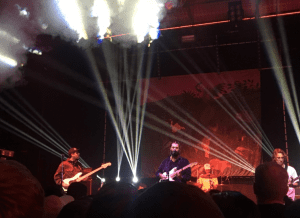 Starting with Supernatural, a song from the new album, the crowd were instantly swaying to the relaxing indie-folk song, perfect for chilling out at the end of a weekend of partying.

The stage set up was very simple with the band playing in front of a huge depiction of their new album cover which they used as their backdrop and the disco ball gave off a mellow reminiscent of a laid back gig.

Performing popular tracks from all three albums such as Sunshine Type, Cutting My Fingers Off and closing with Humming, the crowd were soon starting to really get into the gig as they started crowd surfing and surprisingly even started a mosh-pit.

The small gig room gave off a cosy feel and while the alcohol starting to settle in, the audience were high on spirits as the band soon came to a close and they started to chant for an encore … which did not happen.

The only real disappointment of the night was that they did not play one of their biggest hits, Sasha – even though people were chanting for them to play it.

Overall, the band certainly did not let anybody down and we certainly hope that they return to the North-East in the future.
You can purchase the bands new album here