“Mr Chancellor, Mr Vice-Chancellor, Ladies and Gentlemen: I need not to pause to say how very delighted I am to be here today and to have the privilege of sharing with you in this significant experience. Words are certainly inadequate for me to express my deep and genuine appreciation to the University Of Newcastle for honouring me today in such a significant way.” – Dr Martin Luther King Jr

These words were just the beginning of Dr Martin Luther King Jr’s speech, which he gave after the University Of Newcastle awarded him the Honorary Doctorate in Civil Law on 13 November 1967. They would sound out through different parts of Newcastle once again, 50 years later on Sunday 29 October 2017, while communities from across the North East, along with Freedom City 2017, deliver performances inspired by Dr King’s work and civil right movements from around the world.

The performances were situated across the City of Newcastle and even crossing over onto the Gateshead side of the Tyne. With four of them having two different timings allowing onlookers the chance to get across and catch more than one performance. For us our Experience would start with a small piece performed outside The Boiler House, Newcastle University before The Turning Of Martin Luther King would commence. 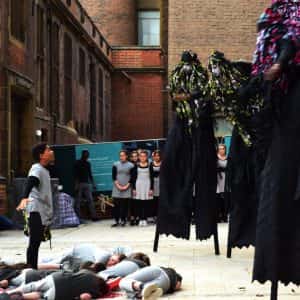 This outside performance was just a taste of what was to come through out the evening. The individuals that made up the teams of performers, were made up of people from different backgrounds, as well as ages. Yet they showed as one, only adding to the theme of the day.
Participants who were on the stilts hung round for pictures while other spectators made their way inside The Boiler House for the next part of their experience but with so much going on, we made our way down to Monument ready to catch the first March on to the area into the second show of The Turning of Martin Luther King, along with demonstrating a piece that incorporates lives lost under the civil rights through out the years. With this part being within the centre of Newcastle, more eyes were drawn by passersby who had no idea of what was going on that moment.

As the crowd grew, we were able to catch up with some people from Newcastle Ravens, who had been asked to participate. This is what Carla Gray, a coach for the rugby teams, had to say after we asked what it meant to be part of this possible once in a life time event.
“The event organiser put out a sort of SOS for a rugby team to become involved, so we only just got in 10 days ago. However, we have learned a lot about the history, which is properly one of the reasons the event organisers wanted to do it as not many of our generation would know of the history. So it was nice to get involved in a community event and think it is quite important to the Ravens, who are an all inclusive gay team, who have experienced prejudice towards them at some point, although not to the levels of having violence against them, unlike the violence shown towards black people and the vote.” 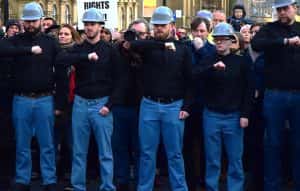 So today we are here to be part of the State Troopers who would not allow those involved in the march from Selma to Montgomery, USA to cross the Edmund Pettus Bridge which led to violent clashes with the marchers. On a second denied attempt — before his infamous speech —  King turned back, not knowing if the same violence would be shown again, although they subsequently tried a third time, which was ultimately successful, allowing them to make it to the vote.

After the second instalment of the performance the already large crowed were joined by those of the Jarrow March, North East of England, this was a reconstruction of the 1936 which was to London in protest against the unemployment and poverty suffered at the time. This march would lead all who had gathered around Monument down through the cities streets and on to the Tyne Bridge for the climax of the whole event along with the first every performance to happen on the bridge itself. 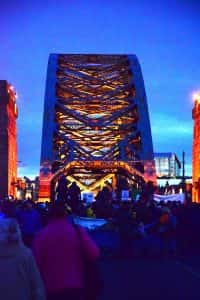 As the crowds moved towards the street the sheer number was close to what you expect to see at a sport event for a high team. And yet what was in front of us was just the Newcastle half and not the Gateshead half, but this would change as both halves approached the Tyne Bridge where they would meet and turn in to one big audience. The light of the day began to disperse making way for night fall which would only add to the already amazing atmosphere created. In the middle of the bridge was a stage only a few meters long and that of a hall way width, just enough area for some to approach and climb to allow spectators to listen to their speeches. Speeches given from different pillars of communities.  As each speech was given some people went around handing out little balls of light from baskets for all to hold as the final light dropped. Acrobats were suspended from the bridge all in red and performing for anyone looking up.  The evening would end with confetti cannons firing off in celebration as all cheered and the atmosphere climaxed to the highest point of the event.

For us the experience has been one hard to define with just words but for any future events defiantly to keep an eye out for. And also one that we were proud to have been included. 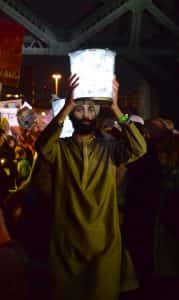