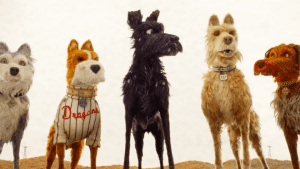 In a dystopian Japanese town, dogs have become the political enemy. The scourge of Megasaki City and a threat to all they encounter through overpopulation and disease. Yet, Wes Anderson’s Isle of Dogs is loving, heartfelt and hauntingly beautiful.

If you’re familiar with Wes Anderson’s work, you’ll know it when you see it and Isle of Dogs is no exception to the rule. The way in which characters move through scenes, the set design, and the dry, quip scripting are all traits to bringing his vision to life. From The Grand Budapest Hotel to Fantastic Mr. Fox, Anderson has relished in joyous success which I’d imagine he will receive again for his latest feature.

Isle of Dogs boast its own ambience, the stop motion work of thousands of individual hairs in each dog and the attention to detail in their every move through the use of weighted aluminium within each puppet, are the small perfections which make this a visual masterpiece. None of this would be the same however, if it wasn’t for the static backgrounds used to embellish the importance of the film and Anderson’s style.

Stuck somewhere between masterful puppeteering and exquisite production design, Isle of Dogs has a tale to tell. The broken heart of a young boy, Atari, whose dog was taken from him without question, along with all others in the city. Unbeknownst to the people of Megasaki, the fear mongering that surrounds the 2040 image of canines is all for the gain of a corrupt politician. It’s also a tale of friendship, love and loyalty (which you may expect in a film mans best friend), when a pack of abandoned dogs join forces with a young boy to find his lost dog with a goal to return to Megasaki from Trash Isles (Isle of Dogs) to cure the dogs of illness and disease and reinstate them into a society rid of persecution and corruption.

While Atari hunts for his lost dog, a crack team of students are putting together a conspiracy theory surrounding the city’s political figures and they’re on the money. Foreign exchange student, Tracy Walker (voiced by Gretta Gerwig), has a hunch that it’s all linked to Mayor Kobayashi’s plan to introduce robotic dogs from his own company and she’s adamant to prove it to bring Atari and the habitants of Trash Isles home safely.

Each dog has their own story, their own history, but they all have something in common: a sense of abandonment. The films writing team, which includes Wes Anderson’s long time friend and actor, Jason Schwartzman, take us on an emotional journey. Spots journey from the lavish lifestyle in an upper class family to his new life on Trash Isles is heartbreaking, from all aspects. Locked in a cage with no hope to succeed on the island alone – all the punches are thrown and reality is a stark theme throughout the film. The character of Chief (voiced by Bryan Cranston) is also a realist. He starts off as the alpha-dog of the pack, taking no orders, but later on shows a willingness to become obedient and there is a breakdown of his solitary mindset. He exploits his lust for an owner, which he never had. It’s this type of character development throughout the film, that creates something more than a film about dogs, but the humanisation of them.

The film boasts a star-studded cast from Bill Murray to Tilda Swinton, as well as new names such as Koyu Rankin as Atari, all of whom bring their own personality to each character. The way in which the film has created a way for dogs and humans to communicate to each other is a simple yet effective way to bridge the gap between the two throughout the movie and adds a level of importance to the message surrounding a multicultural society and an inclusive, not segregated, world.

Packed with witty humour along the way, Isle of Dogs could be one of 2018’s best releases. A winding, heartwarming tale of love wrapped up inside all of its excitement and adventure.