As today (4 May) is Star Wars Day, here are the top 5 Star Wars characters, as chosen by our editor.

Otherwise known as Princess Leia, she is in many ways the matriarch of the whole Star Wars series. Portrayed by the late Carrie Fisher, Leia was the original strong female character that many young girls looked up to when the original triology first came out and she only got stronger as we moved to Episodes VII and VIII. While she may have been strong, when compared to modern female leads such as Rey, she still seems very weak. However she was able to pull of that infamous gold bikini with some dignity so we salute her!

One of the newer characters but one that quickly earned our affection. This former Stormtrooper’s moral compass is incredibly endearing and his loyalty to his friends is something we can all relate to. Played by John Boyega, his steadfast determination to do the right thing is what constantly drives the plot points forward, but he also has a cheeky side and that, coupled with all of the above, is exactly why he is on this list. 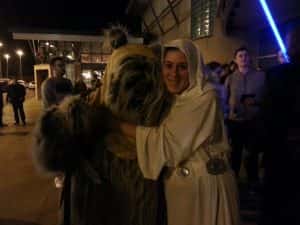 Another new character. However, she is to modern little girls, what Leia was to little girls back in the 1970s. A strong female role model to aspire to. She may appear serious and angry a lot of the time, however she is mentally and physically strong. Daisy Ridley executes Rey’s frustration at not knowing why she was abandoned by her parents, her determination to not rely on anyone but herself and her willingness to put herself in danger for her friends perfectly. Rey seems to be loosening up slightly, realising she can’t always fight alone and that she needs someone to have her back and that is a lesson we all need to remember sometimes.

Played by Mark Hamill, the Star Wars universe wouldn’t have been the same without Luke Skywalker. He really came into his own in Episode VIII as an older and wiser Luke. Less hot-headed and a lot more burdened by how his choices affected others. We almost see a character development come full circle: he started out as a young man, with a short temper, not thinking things through and wanting everything done immediately. In Episode VIII he thinks things through, he’s burdened by what his decision led to and in the end he is redeemed. His battle with Kylo Ren (Adam Driver) was a show of his strength, and who can forget his part in the biggest plot twist in film history?

I couldn’t choose between them! They may not be humans but without them a lot of the characters wouldn’t have survived or come up with the ideas that they did. Communicating through beeps we still somehow seem to understand what they are feeling and we can infer what they might be saying due to how other characters respond to them. R2 is apparently very sassy and sarcastic if C3PO’s responses are anything to go by and BB8 can be cheeky if we are to believe Poe Dameron. They provide light relief to heavy moments in the film and they are incredibly loyal. No matter what is thrown at them they get back up again!

However you plan to celebrate today, whether it’s fighting the Dark Side or hanging out with some Ewoks, from all of us here at Northern Lights, may the Force be with you!