“A Star Is Born”: a cinematic masterpiece with an all-too-real message 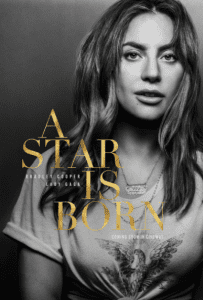 A Star Is Born follows a washed-up country singer and alcoholic, Jackson Maine (Bradley Cooper), who comes across a struggling waitress, Ally (Lady Gaga), who has fallen victim to her own insecurities and suppression at the hands of her boss at the restaurant in which she works.

Maine, after hearing Ally perform at a bar, quickly falls for her and encourages her to pursue a career in singing and songwriting. Within no time, Ally’s career skyrockets, leaving Maine to battle his demons in Ally’s shadow.

Before going into this movie, I expected to witness a story of true and unconditional love; however, the reality of this movie and its subject matter is far more deep and tumultuous.

The main themes aren’t of love as such, but codependency, mental illness, substance abuse, insecurity and masculinity in crisis.

Whilst I have watched many movies, I have never came across one quite like A Star Is Born. It is a piece of cinema that unapologetically tackles immensely painful, authentic issues; a quality that most Hollywood movies often fail to possess.

Cooper’s character, Jackson, repeatedly reinforces the importance of having something to say and saying it, and this movie certainly speaks volumes.

A Star Is Born is Bradley Cooper’s debut as a director, and his work was nothing short of spectacular. In the opening sequence, Cooper uses a handheld camera while his character Jackson is swallowing pills before his concert; washing it down with a transparent and obviously alcoholic liquid. The chaos of the shaking camera sets up the tone of the movie, and we, as an audience, quickly surmise that the character of Jackson is just as unstable as the device capturing him.

Cooper kicks off the movie with a hit song he co-wrote with Willie Nelson’s son, Lukas Nelson, “Black Eyes“. This performance is sensational and captivates your attention. Cooper and Gaga sing all of the songs live in this movie, making a fictional medium seem like a real-life tour that we, as an audience, are experiencing first hand. All of the songs are stunning, meaningful and create goosebumps.

In terms of performances, Bradley Cooper and Lady Gaga are just sensational.

Cooper, who is known for his work in comedy, gives an authentic and heart-breaking portrayal of Jackson Maine. His raw emotion contributed to the reality of Jackson’s mental and substance issues. His mostly inaudible and slurred dialogue made the character complex, unheard and almost unreachable, which is true to a lot of those who suffer horrifically with mental illness and/or substance abuse – we can’t quite reach or save them.

Cooper also gives the character a sweet and human quality in which we see most of when he first meets Ally. These sweet qualities make it that more soul-destroying to see Jackson engage in such self-destructive behaviour.

Gaga also makes her debut in this film as an actress; and her performance of timid, anxious and soulful Ally was jaw-dropping.

As an artist known for her androgyny and extravagant style and musical approach, it was thrilling to see her bare and vulnerable; to see who hides behind the mask. When we first meet Ally, she possesses a childlike wonder, smothered by insecurity in her musical abilities and appearance. When Jackson invites her on stage to sing “Shallow”, the groundbreaking song she wrote,  the performance is videoed by fans, making Ally’s talent publicly known.

Ally soon gets a manager, Rez (Rafi Gavron), and her fame is quickly acclaimed. During this part of the narrative, we see a once meaningful songwriter who wrote the lyrics, “when you look at me, and the whole world fades; I’ll always remember us this way”, become a sequin-clad, copper haired pop-star. Her most popular songs having the lyrics “why’d you come around me with an ass like that?”.

The transformation Ally undergoes alludes to how artists can be stripped of their identity in the music industry and by their managers, merely for the purpose of profit and ‘like-ability’. This turn of events starts to really show the cracks in Jackson’s masculinity. His inability to accept Ally’s overshadowing him perhaps suggests that men in society are struggling to accept or navigate the rising power of women without it damaging their masculinities.

The movie does have its faults. The story was rushed at times due to their being so many things to explore. I failed to truly invest in Ally and Jackson’s love story, simply because the depth of them falling in love was abandoned. Gaga’s performance made Ally extremely relatable and believable, and I was able to buy her love for Jackson, but the chemistry between Gaga and Cooper was just not there, in my opinion.

Despite this, I would highly recommend this movie. It is a true showcase of real talent in the singing and acting; a heartbreaking rendition of taboo themes that truly gives audiences a lot to think about when leaving the narrative world. Important note: do bring tissues.

2 Responses to “A Star Is Born”: a cinematic masterpiece with an all-too-real message