Dr Who: The woman who fell to Earth

Dr Who series 11: The woman who fell to earth 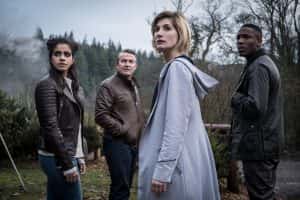 After a very mixed series 10, Doctor who seemed to have run out of steam.

Its viewing figures were the lowest since the series rebooted in 2005 and many blamed the head writer, Steven Moffat, who had been in charge of the series since 2010. Peter Capaldi was a great actor but let down by poor writing: by 2017, the series was calling for a reboot. Some even feared that it could get cancelled.

Enter the 13th Doctor, Jodie Whittaker, announced after the Men’s final of Wimbledon in 2017 to a mixed reception. Some fans loved it and others hated the change.

This was a big step for Doctor who: a new doctor, a new head writer (Chris Chibnall), new companions, a new look for the show and a new sonic screwdriver.

Series 11 is almost a soft reboot for the series – and a well needed one.  A lot rested on the first episode: it had to be good, it had to get the fans back and it had to set the tone for the new doctor. If it failed, people would blame the female Doctor and perhaps not watch the rest of the series.

Well, the first episode, in my opinion, was awesome. It felt like the best writing we’d had in the series for a long time.

It felt fresh, it felt fun, it was 60 minutes of perfect Doctor who.

Jodie Whittaker is an amazing Doctor. Being a woman does not affect anything about the show, the Doctor is as good as s/he has ever been. I think it’s great that the producers have allowed her to keep her Yorkshire accent.

Whittaker managed to capture some of Capaldi’s subtle moves, playing into the idea that the regeneration process had not fully finished and she still didn’t know who she was yet. I found this a nice touch that helped bridge two doctors together.

The new companions are great. Chris Chibnall is very good at writing and developing human characters, some of whom, such as Ryan and Graham, saw more development in one episode than previous companions had during an entire series.

It was good to see a character with dyspraxia. It played well in the episode and I hope it continues to do so throughout the series. Gregg, (Bradley Walsh), was great, he was almost the voice of the audience, constantly asking why things were happening and making us aware of the reality of the situation.

The other companion, Yasmin Khan, (Mandip Gill), was stuck in a low-end police job and desperate for more. I look forward to seeing her character develop further into the series.

The story was engaging, with many twists and turns keeping the viewer in the action. The pacing was perfect, with nothing feeling dragged out or too short.  The build-up to the adventure worked well, with the new companions going about their daily lives, unaware of the chaos about to befall them.

I felt this was a great way to introduce the new Doctor: no crashing Tardis, no slow moments with the doctor sleeping, just straight into the action on a train in Sheffield.

The main villain, a Stenza Warrior, was also interesting and I am glad it was something new, rather than an old monster. Claiming the teeth of its victims and adding them to its face, it had come to earth to hunt a target human and bring them home to win the prize. Chibnall, unlike Moffat, is not afraid of writing a spate of deaths into his plots and, as a result, a few people fell victim to the Stenza warrior and it felt genuinely menacing.

It was great to see the new doctor come into her own as she made a new sonic screwdriver from spare parts and old spoons lying around in a car garage. This is a new trait: instead of relying on the Tardis, this doctor is resourceful and can make do with what she’s got.

The climax was one of the best we’ve had in at least 3 series as the Doctor, Ryan, and Yasmin climbed a crane to save Karl – the target of the Stenza Warrior.

It was edge-of-your-seat stuff, and the cinematography was great, you actually felt a sense of danger because of the height they’d climbed to and the effectiveness of the monster. However, the Doctor saved the day after a short heroic speech.

The shock of Ryan’s nan dying in the first episode was something I did not see coming. It was very emotional and very well written, as it was the catalyst for a healing change in Graham and Ryan’s relationship. Bradley Walsh gave a fine speech at the funeral and the acting throughout this scene was 10/10.

And so the doctor built a teleporter to locate her Tardis and said goodbye to Ryan, Graham and Yasmin – except the teleport brings them along by mistake, thus creating our newest Tardis crew. Quite how they will survive the vacuum of space though, I have no idea.

There was not much I did not like in the episode but, if I had to be picky, it would be that the episode had no title sequence. I find this odd as the new theme is great, though perhaps they are saving it.

In conclusion, this was a well-needed soft reboot of Doctor Who, living up to the hype and expectation of the 15 month wait. I cannot wait to see what series 11 will bring.