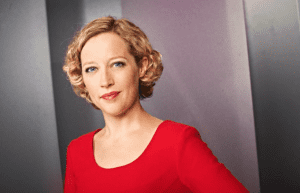 Cathy Newman is still getting used to being asked the questions, as opposed to putting them across.

“I definitely find it easier asking the questions,” she laughed, backstage in her dressing room at the Gala Theatre, Durham.

The Channel 4 News presenter has been getting used to being the topic of conversation.  The organisers at Durham Book Festival had to change the venue due to the amount of interest in her event, where she promotes her new book, Bloody Brilliant Women.

This title, which plays on Theresa May’s ‘bloody difficult woman’ quip, is a freewheeling feminist history of 20th century Britain. The pages are indeed filled with bloody brilliant women, the ’pioneers, revolutionaries and geniuses that your history teacher forgot to mention.’ Some are already well known, many are not so.

The wonderful @cathynewmanc4 discusses #BloodyBrilliantWomen on the final day of #dbf18

“I was taught history in quite an eccentric way at school, I feel like I learnt about the Anglo Saxons time and time again and nothing much beyond,” Cathy explained. “I love history and always want to learn more about it, to try and fill in some of the gaps in my knowledge, so I read these big historical tomes.”

It was while reading one of those books that the concept for Bloody Brilliant Women occurred to Cathy. She continued: “I got to about page 50 and only two women were mentioned: the Queen and Agatha Christie. It set me thinking, what did women do in 20th century Britain? Was it the case that they played very peripheral roles or did they have a much more significant role in transforming the country?”

Of course it turned out to be the latter. 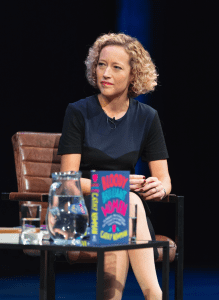 From aeronautical engineer Beatrice Shilling, who invented a device which helped win the Battle of Britain, to Jocelyn Bell-Burnell, whose discovery of pulsars paved the way for Stephen Hawking’s research on black holes, the list goes on.

From engineers, to social reformers, politicians to barristers, the women in the book have changed the way we think about every aspect of life, from birth through to death.

These are women who refused to be bowed by tradition, or their generation’s hostile, entrenched views about gender. These are not polite, mild-mannered ladies waiting patiently for their turn. These are bloody difficult – and brilliant – women.

Great to sign copies of #bloodybrilliantwomen for Lucy, Jenny and many more @durhambookfest – and lovely to see it being read over coffee immediately after the event! 💯 enjoyed being interviewed by vice-principal of St Chad’s college, @durhamuniversity Dr Eleanor Spencer-Regan, who prepared so thoroughly and had so many thoughtful questions. Fab questions from audience too. #books #bookstagram #literaryfestivals

It’s wholly appropriate that Cathy would author a book of this kind. She has spoken up regularly on women’s issues, from the gender pay gap to her own experiences of sexual harassment.

However, Cathy admits that she hasn’t always identified as a feminist. “When I started work, nearly quarter of a century ago, I wouldn’t of called myself a feminist,” she said. “I just thought equality would get sorted pretty soon, things were going the right direction.”

But that’s not to say she didn’t come across everyday sexism. “I think it was a gradual realisation,” she explained. “I worked on newspapers and got asked to do the photocopying because people just assumed that because I was a women I must be a secretarial assistant.”

Cathy continued: “I think my awareness of inequality has grown the older I’ve got and writing the book really reinforced that. I felt in awe of these women who achieved so much, but also quite angry that they haven’t secured a more lasting legacy of equality across the spectrum.”

It is true that while there were so many groundbreaking achievements throughout the last century, many of the battles women were fighting then are still being fought today.

The Equal Pay Act came into force in 1970, yet almost 50 years later the gender pay gap is as prominent as ever. Cathy herself stood up to her employers ITN, producers of Channel 4 News, when a pay gap of almost 20 per cent – double that of the BBC – was revealed. “You feel that so much progress was made by women in the 20th century, but actually, it feels very much like two steps forward one step back,” she said.

Her book recounts the experiences of Bessie Braddock and Leah Manning who, in 1945, were elected Labour MPs. They were known in the House of Commons as ‘United Dairies’ due to the size of their breasts, and Cathy feels this is not a million miles away from the abuse women in the public eye are so often subjected to today. She said:

“Female MPs had to deal with such awful unpleasantness. I feel that women are still subjected to a barrage of insults and vitriol.”

Cathy has had her fair share of Twitter trolls, to the point where she has had to involve the police. “What’s frustrating to me is that there’s so much of it, it’s so prevalent every time you go on Twitter,” she said. “Yet I’ve reported lots to the police and they can’t do anything because if they’re not in this country they’re powerless to act.”

But she remains resilient. “On the positive side,” she added. “Women won the vote, we have the right to have an abortion, there are protections for women. We have the Equality Act and the right to sue if you believe you’re getting paid less than a man to do the same job. There were so many groundbreaking achievements that for the large part were won by women.

“We should be encouraged by what they achieved rather than downcast by what we still have to achieve.”

Exciting moment after years of hard graft…here’s my first ever book in the local bookshop: #bloodybrilliantwomen #bookstagram #bookshelf #superthursday Thank you @wmcollinsbooks

Bloody Brilliant Women is the book many will wish had been written when they were growing up, including Cathy herself. She feels encouraged that at least her own daughters, who are nine and 14, will have read more diverse accounts of history than she did.

“I do feel quite annoyed that I didn’t know about these women growing up,” she said. “Who knows, I might have been an aeronautical engineer if I’d known about Beatrice Shilling.”

That said, with 12 years at Channel 4 News, seven of those as co-presenter, a career holding the powerful to account is not to be sniffed at. And she overcame plenty of her own obstacles to get where she is.

“I feel like I can’t really complain about what I have had to fight against,” she said. “But it is nevertheless the case I think, for any woman who wants to achieve, you’ve got to have sharp elbows.”

“I’m probably a bit of a bloody difficult woman,” admitted Cathy. But as we discover from the book, all the brilliant ones are.