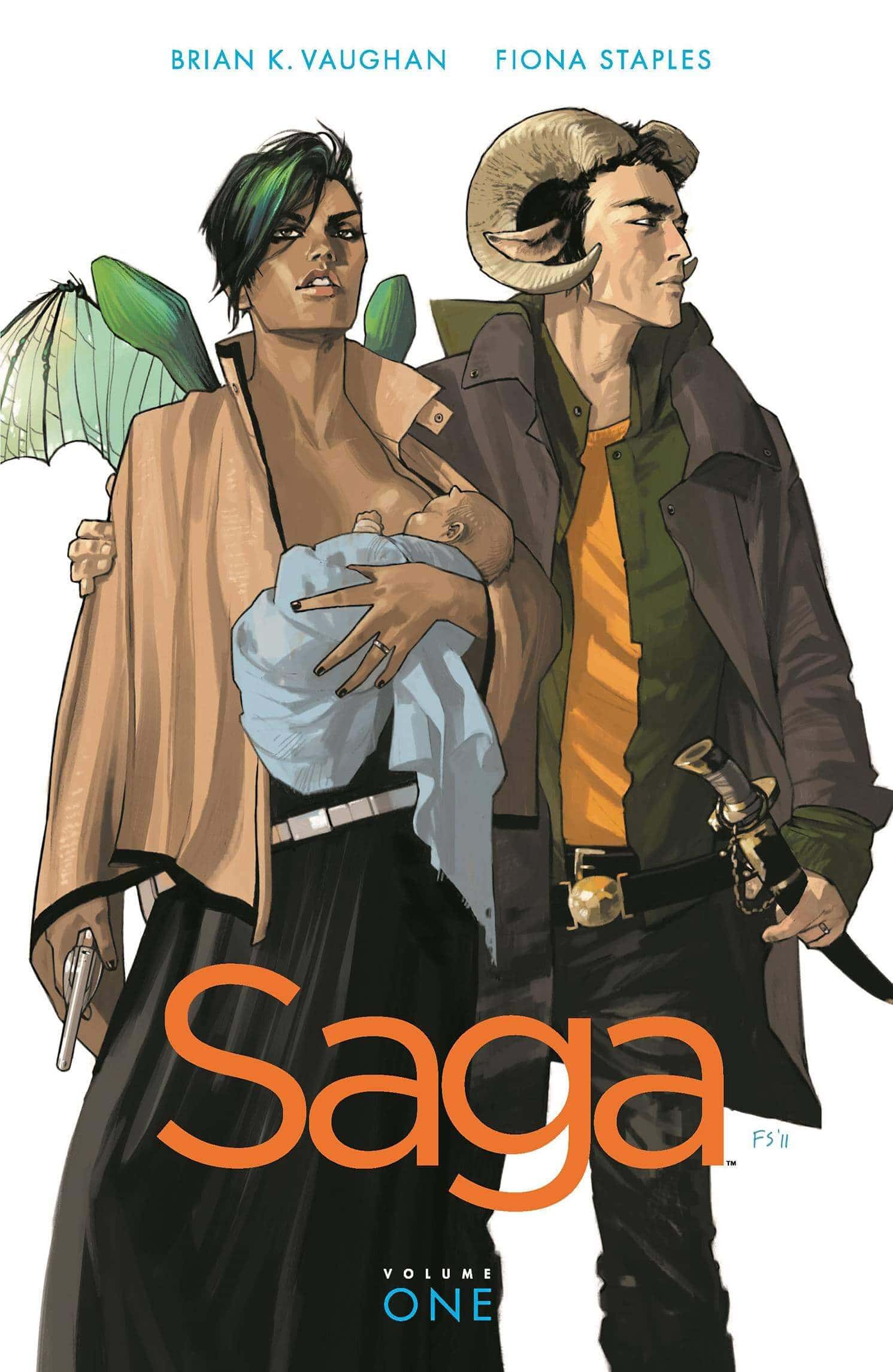 Saga is one of the most critically acclaimed indie comics of all time, constantly in top ten lists and always recommended to people when they say they want to get into comics.

But, is it actually any good?

Bit of a stupid question, that, of course it’s good, it’s by Brian K Vaughan, he of Runaways fame.

Of course, when opposed to Runaways, a book that could leech upon the wider mythos of the Marvel Universe and use it to the advantage of both the characters and the universe building, Saga has a much harder task at hand. Vaughan has to build up the world of Saga and the characters from scratch, which he does rather spectacularly.

The main story is relatively small-scale, or at least it is in volume 1. It’s a simple story about a couple who are trying to care for their new-born child, while also avoiding bounty hunters, alien species and various other beasties.

So, not your typical upbringing, then.

The smaller-scale story allows Vaughan to flesh out the characters much more, to the point where I think this is the fastest I’ve probably ever liked a set of main characters in any comic – and I’ve read a lot of comics.

In essence, Saga is Romeo & Juliet, but in space. It’s Space Shakespeare, and its great fun.

Character-wise, I absolutely love them. The two main characters of the piece are Alana, a winged fairy-like alien and her husband, Marko, a magic goat-horned alien. Technically, Hazel, their daughter, is also one of the main characters, but she barely does anything in the first volume, quite rightly too, seeing as she’s a new-born.

Then you’ve got the absolutely amazing side-characters, such as Izabel, a freaky ghost who befriends our main characters and The Will and his sidekick, Lying Cat. The Will is a freelancer, who’ll do anything for money, and Lying Cat is a cat that knows when you’re lying and will announce it to the world.

The art deserves a special mention, Fiona Staples is absolutely amazing, probably one of the greatest artists I’ve ever had the pleasure of seeing art of in a comic. Her work is fluid and dynamic, with beautiful pieces adorning each page. I’m surprised I’ve never seen any book with her art before, and I’m extremely glad I picked this book up, if simply only for the art.

The basic plot of the first volume is as follows: Alana gives birth to Hazel; Alana, Hazel and Marko go on the run as freelancers are chasing them down for the bounty on their heads (Seeing as how Hazel is a hybrid of two different races); along the way the trio encounter new experiences and people, such as the ghost Izabel. At the end of volume one, they take off in their newly discovered ship and suddenly two-figures appear on the ship.

Vaughan builds this universe so perfectly, and the comic is paced insanely well. You never feel like it’s dragging and you’re always itching to read more, to learn more about this universe, about all the species and characters that live in it and the story possibilities of the universe.

As a hook, that cliffhanger is so good I already own the first six volumes of Saga and it’s shot up to the top of my favourite comics of all time lists. I can’t wait to find out what happens in this universe and what’s coming next.