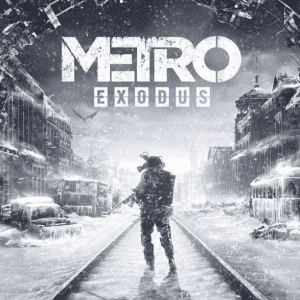 Artyom returns for the third installment of the Metro game series that was inspired by the international bestselling book; Metro 2033 written by Dmitry Glukhovsky.

The game starts off with you getting a brief recap of what has happened since The Last War (which I believe to be Metro’s depiction of World War Three, with nuclear bombs being used to end it) and little snippets of what it looked like in parts of the last two games.

The first half an hour sets up the game of Artyom looking for signals for life outside the metro and after being injured, waking up in the makeshift hospital, which wasn’t helped when I alerted a small group of Watchmen (mutant creatures) with only two shells in my post-apocalyptic shotgun. I ended up doing what every gamer has done once in their life for a First Person Shooter; Can I see my legs and feet?

I could, although I was shocked that the first time I looked, it looked like he was wearing socks. I may have mistaken them for shoes.

As the story continued I found the game mixed in linear levels where it’s only one single path to complete the mission and semi-linear levels; a small map where you can explore hidden areas for small side missions while heading towards your main story mission.

The open world aspect of post-fallout Russia is no doubt beautiful, running on the 4A Engine, and works well with a change from Metro’s original linear playstyle. Allowing you to have at least an hour or two in a single area exploring (unless you just head towards your main objectives).

The only flaw I found in this game though, was the weapons; one kept jamming. Whether this is only because it was my starting weapon and better weapons to be collected/unlocked later on in the game, it was annoying anyway. It’s possible the problem may have been down to the weapon being dirty from its use in-game.

When you play a game like this, you want to try and finish it in one life, immersing yourself into the game; keeping Artyom alive until the end. It becomes more difficult to do so when you’re surrounded by mutant, feral monsters that want to kill you and your weapon only can fire two or three rounds at a time because it’s jamming.

However, adding that into consideration the game is great to play and even with only a short amount of time played (a few hours), I would recommend this to a gamer who likes post-apocalyptic games.