Retrospective: Trainspotting: all grown up 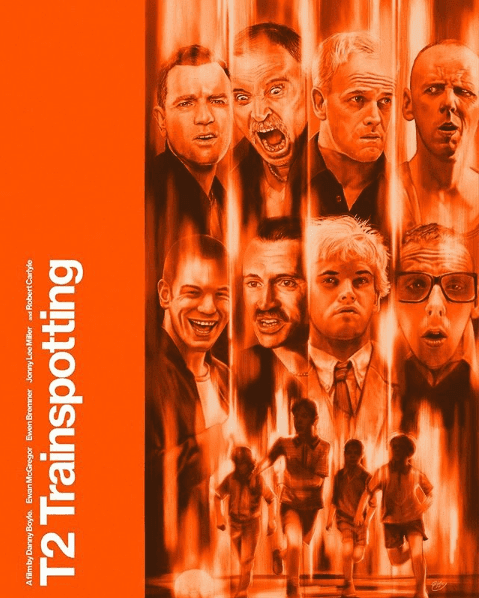 I grew up in a post-Trainspotting world.

Released six months before I was born, the soundtrack of my youth included Underworld and Iggy Pop, though my teeny, tiny brain wasn’t able to comprehend the complexities of addiction, and the choice to rebel against the world we’re taught to exist in – something so many film posters droned on about.

Twenty years later, T2: Trainspotting was released, now fully mature, tackling the topics of aging, nostalgia, and finding one’s place in a world that was once rejected.

This gave me an opportunity to watch the first film with new, more mature eyes.

I was old enough now to appreciate the grimy cast of wasters and lunatics, and able to see parts of myself in even the most morally bankrupt characters. Even Begbie (Robert Carlyle) sometimes strikes a sympathetic note whenever he throws a tantrum to distract from his own flaws. A flurry of violence and bad words, we are given little chance to see the soft-heart in him, if any chance at all. Frankly, all the important character development we get from him comes from the sequel – a theme I think –  where he shifts from being our toxically masculine friend to full-blown antagonist – channeling Michael Myers as he chases the world’s biggest smile with legs, Mark Renton (Ewan McGregor), through a car park with a knife.

We also learn of Begbie’s estranged father, wandering aimlessly through old Leith Central Station, referred to as ‘the old wino.’  This revelation, paired with Begbie’s strained relationship with his own son, brings a whole flavour of ‘sins of our fathers’ to the film, questioning whether a father’s dark past can make space for his son’s bright future.

Golden-headed Sick Boy, Jonny Lee Miller, hits a little close to home for me. His overly verbose monologues about which James Bond is best reminds me of my own, overly verbose tirades into topics I know fine well I have no authority on, but my opinion must be shared regardless. His biggest flaw (ignoring the heroin) is his ego, which, like Begbie, doesn’t really add up to much until T2, where we find Sick Boy blackmailing high profile figures by recording them in compromising situations.

His ego often gets the better of him, leading Renton and even Spud (Ewan Bremner), straight into the hands of Begbie, now escaped from prison and neck deep in red mist. In trying to control the situation he and his friends are in, he failed to notice it was all out of his control in the first place. He doesn’t really get redeemed by the end, more accepted for who he is. I suppose that’s fine, not many of our rag-tag group of Life Choosers do get that cathartic chance of redemption, except Spud, who didn’t really need the opportunity in the first place.

Oh, Spud. Where would we be without that one friend who can’t catch a break? Our unfortunate but loveable bumbler is little more than comedy relief in the first film (I’m thinking specifically of the poo scene), but in the interim, he has grown into a thoughtful and talented storyteller. His role becomes something of a shadow of Irvine Welsh himself, who took from his own experiences in late adolescence to give us the novels on which these films are based. His gangly, awkward demeanor gives the character earnestness in buckets, and it’s not hard to see why Renton feels in some way obligated to, in some ways more literal than others, save him.

Which leaves us with Renton, fast running pretty boy with a mouthful of charm and opinions on contemporary life. I’d hardly call him an audience surrogate, but he’s the closest thing to a functional member of society amongst the crew. Sarcastic and rebellious, proving an answer to everything and a solution to nothing, his whole thing is ‘getting away’, which gives the iconic opening scene to the first film new context. It also evolves the opening scene of the sequel into something of a heavy metaphor, forcing Renton to literally stop running by way of heart-attack, sending him back to an unfamiliar hometown and barely familiar old friends.

So what’s my point? Why am I drawn to middle-aged men finding purpose over young boys denying it? I am the key demographic for film one, but I think it’s all a bit old hat now. Been there, done that, seen the film and bought the poster. I’ve danced to Iggy, sang to Blur, cried to Pulp and spared a thought to Lou Reed. The baby looks fake and the dialogue comes off hokey. The references are mysterious to me, and I refuse to do homework to watch a film.

I’m a Millennial trying to stand in Generation X’s shoes, and, yes, they fit, but the aesthetic is dated. Should I hold off for seven years, when the first film becomes thirty and therefore retro? Will Trainspotting get the post-modern-ironic adoration that films like Back to the Future, and Ghostbusters enjoy now? Something tells me not.