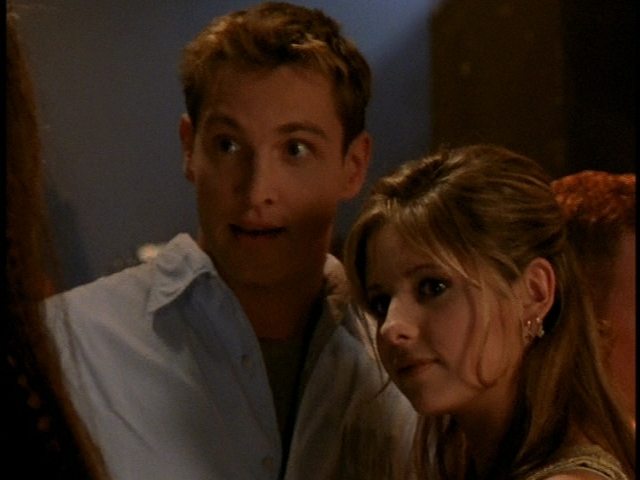 And here we reach the first episode of the series so far to substantially accelerate the season’s story arc. Sure, we’ve had hints of it here and there, but nothing quite as major as this episode, in particular The Anointed One. But, I’ll get to that properly in due course.

This episode is an interesting one, mainly due to it being the first one so far in the series to properly address how being the slayer affects Buffy’s social life (as it obviously would). Since she’s out so often late at night, does she ever have the chance to date? To party? Or is she always on the lookout for a potential threat?

It’s a solid concept, a solid episode. Nothing more than that, however. It’s a shame really because this could have been a proper full-blown look into Buffy’s social life as the Slayer. Sadly, all this amounts to is nothing more than a fun episode. Now, there’s nothing wrong with a purely fun episode if that’s your sort of thing. But it’s not mine. I prefer the Buffy episodes that are deeper, that have more substance. It’s why The Body (more on that much, much later) is my favourite episode of the show. So while this isn’t necessarily a bad episode, it does lack for me.

I did kinda like the way they advanced the story arc however. Having The Anointed One never actually encounter Buffy in the episode was a masterstroke. It’s also mysterious how the hell they managed to make a kid, a seven year old child, the creepiest thing in a series filled with Lovecraftian horrors.

As usual, the cast is great, Sarah Michelle Geller is as wonderful as ever, Nicholas Brendon as funny, Anthony Stewart Head as charming and Alyson Hannigan as sweet. The guest cast leaves something to be desired however: without naming any names (because I’m referring to ALL of them), they just seem dull and uninterested sadly. The love interest is passive throughout the episode and is your typical teen love interest stereotype, never becoming anything more than that.

Overall, Never Kill A Boy On The First Date is a fun, albeit skippable episode of Buffy The Vampire Slayer, one that you won’t remember a week after watching it, but you also won’t regret watching either.

Best Moment: Giles showing up to the house and pretending to be there to ask about books when Buffy’s date shows up is Liquid Gold. Pure fun and character development combined into one moment, what more could you ask for?

Best Line: “Alright, I’ll just jump in my time machine, go back to the twelfth century and ask the vampires to postpone their ancient prophecy for a few days while you take in dinner and a show.”

Fun Fact: Uhh… I sorta couldn’t find one, so why don’t you enjoy this cover of the Buffy Theme instead!