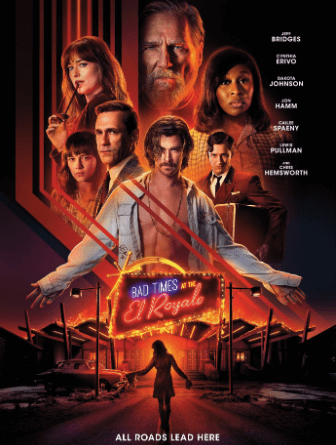 Building upon his apparently stellar work in 2011’s Cabin in the Woods, director Drew Goddard is back, and this time he’s gearing up with a thrilling ensemble, Bad Times at the El Royale. With every ensemble, there’s always someone that has to go above and beyond with their performance. Someone that really stands out from the rest of those involved in the movie.

Jon Hamm, in particular, manages to knock it out of the park with a great performance as Seymour Sullivan, which is gearing up to be the best performance of his career. His brash friendliness in the opening moments of the movie become unsettling as the movie progresses, culminating in some fresh and unique plot developments. His role is possibly the purest of all in the movie, albeit the one that is unfortunately not given enough time in the later hour of the movie. Hamm’s sudden surge in prolific roles is a welcome one, with Bad Times at the El Royale providing him with plenty of engaging and dark moments to win over the audience.

Goddard works best with unrelenting, lengthy and stylistic shots. His pacing, world-building and directing attributes a great deal of care and it shows extremely well. Some favourable comparisons have been made of his work to that of Quentin Tarantino’s, and that’s definitely one of the most obvious cases to make. Long panning shots are his forte, with plenty of track cams and a consistently moving camera making this some truly unique cinematography. His structuring of the plot is certainly similar to that of Tarantino’s The Hateful Eight.

The only major problem with this style is that it breaks tension rather often and far too easily. Every character has their hidden, dark backstory, and the movie uses a chapter style format to express the motif and disguised nature of each leading role. The issue here is that while large revelations are being made in one chapter, others have yet to discuss the impact or even notice it at all. What should’ve worked as a tense display of knowledge equalling power instead derails the tension and suspense of the movie. There’s only so many times you can watch the same scene unfold but from a different point of view.

Bridges and Hamm, in particular, are definitely the most interesting of the ensemble. I wasn’t particularly a fan of Hemsworth, nor of Dakota Johnson. Both feel shoe-horned into the movie as a way of creating extra drama that wasn’t necessary to the pacing or tone of the movie. Without them, this still would’ve been a rather tense and on-location style movie, with sporadic iconographic reference to the swinging 60s of southwest America. Still, even in the slowest scenes, Goddard’s consistencies as a director prevail and provide some fairly enjoyable scenes.

I’m really excited to see what Goddard’s inspired direction will offer up next, because if it’s anywhere near as good as Bad Times at the El Royale then we’ll all be in for one hell of a ride. Its soundtrack and cinematography boast excellent results and as such, Goddard has managed to bring together a very strong second movie that I can only imagine builds on his impressive skills behind the camera. He’s a definite director to keep your eyes peeled for in the coming years.